Jewish Voice Ministries Church Relations Department brings doctrinally sound, unique, and insightful presentations to help equip your congregation for the work of service, to the building up of the body of Messiah (Ephesians 4:12).

JVM’s Staff Evangelist, Jack Zimmerman, is a former stand-up comedian and has an engaging wit and dynamic speaking style. A Messianic Jewish Rabbi, Jack has a deep understanding of the Hebrew roots of the Christian faith that makes him a valued and respected teacher of the Scriptures. He is also an award winning reporter, radio and television host, and has taught Bible classes throughout the United States, and at theological universities in Russia and the Ukraine. 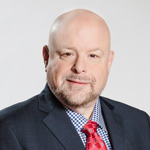 Jonathan Bernis is President and CEO of Jewish Voice Ministries International (JVMI) and has been a leader in Messianic Jewish ministry for more than 30 years. He hosts JVMI’s weekly syndicated television show, "Jewish Voice with Jonathan Bernis," aired worldwide.

Here's what pastors are saying