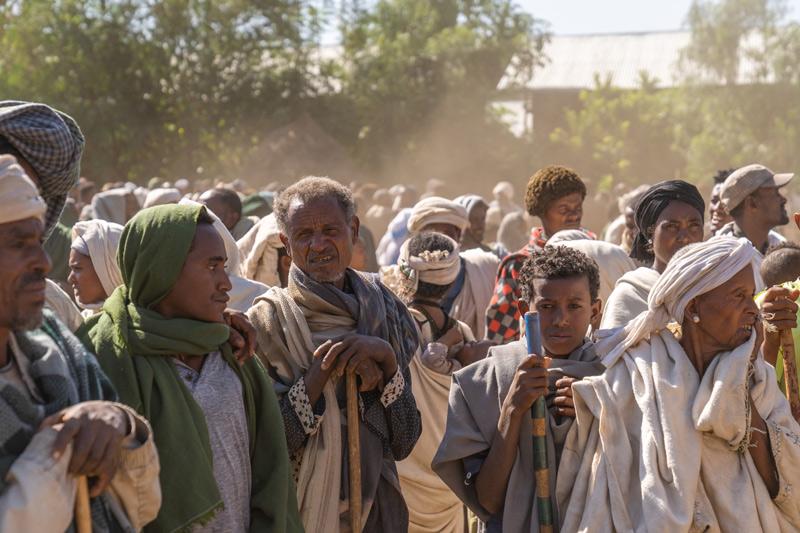 Leading our Global Outreach Department affords me not only the privilege of participating in our Medical Outreaches among hurting Jewish communities and their neighbors, but also the great honor of traveling several times annually to far-flung areas around the world where we have learned that a historically Jewish community may be living.

Some of these exploratory journeys are just down the road from areas where Jewish Voice is already ministering, and others take us to new areas, new regions, in the midst of new political and religious circumstances, where we never could have imagined we would go in Jewish ministry. One such exploratory trip led us to the almost entirely Muslim city of Jijiga, Ethiopia, on the border with the hotly contested and UN-unrecognized startup nation called Somaliland.

The Jijiga area, as well as Somaliland, are home to two related tribes, called the Yibir and the Yizak. The Yibir, a derivative of the word “Hebrew” in Somali, and the Yizak, meaning “Isaac” in the same language, both identify as historically Jewish and live either tensely amidst, or pushed to the outskirts of, predominately Muslim cities and towns throughout the region. These two clans are historically related to the larger Ethiopian Jewish community which lives in central and northern Ethiopia and which traces its own roots all the way back to King Solomon and the Queen of Sheba. Yet they look tribally Somali, speak the Somali language, and today live in Islamic communities severed almost entirely from their Jewish relatives across the country.

My exploratory journey took me on a one-hour plane ride from the green rolling hills of predominately-Orthodox Christian Addis Ababa to the low desert scrub and endless plains of a predominately-Muslim Somali region of Ethiopia. As we disembarked the propeller plane and drove from the airstrip into the crowded city streets where women covered almost entirely in bourkas rushed around to shop before the minarets would announce the mid-day call to prayer, I thought to myself, “how did my ‘yes’ to Jewish missions and our yes’ to the Lord as a ministry to meet and minister to our people even to the ends of the earth, ever lead us here?!”

As I somewhat apprehensively approached the café table where the ‘Sultan’ (leader) of the regional Yibir tribe awaited our meeting which a local mutual friend had arranged, I was confused to see an older man with a worn suit jacket and a golden Muslim prayer cap sitting staring off into nowhere, slowly working a dark brown set of Muslim prayer beads through his fingers one-by-one. My translator introduced us in Somali. No sooner could I stretch out my right hand to give a good, firm American handshake than the Sultan half-stood out of his chair and grabbed my arm with both hands, his left hand holding my elbow and not letting go. He immediately switched to English and through a thick accent exclaimed, “You are my cousin!” I slowly sat down, not knowing what to make of such a warm and excited greeting from a man who looked almost no different from the elders lounging down the street on the steps of the mosque.

weAgain, still not knowing what to make of this unlikely meeting, I said, “I’m Ezra from Jewish Voice. It’s an honor to meet you, Sultan.” Before I could finish the sentence, the Sultan exclaimed, “We are brothers. Because we come from Israel. And though God scattered us, He will regather us! We are not like them. We do not come from here! We come from Israel!” I was speechless. Who was this man sitting in front of me who, apart from this confession, I would have mistaken for any other Somali senior citizen in town and left him alone to his thoughts and his prayer beads? Why was he so willing to reveal the identity and destiny of his people to a man he had met not one minute before? How, so isolated in a community so openly hostile toward all things Israel and Jewish, could this Sultan so aptly articulate how he and his people ended up here and that they didn’t belong here? But before I could adequately answer these questions, I responded in the only way I knew how from our other meetings with emerging historically Jewish communities in Africa and beyond: “Jewish Voice serves our Jewish people wherever we are in the world. And we’ve come here for you.”

Later on, we took a trip to a known Yibir slum on the edge of town. There were noticeably fewer mosques in the area, but also noticeably less infrastructure. On the street corner, under a tattered tarp fastened to a barbed wire fence and a broken utility pole, sat a man in a white t-shirt fanning the flames of a makeshift blacksmith station made of spare parts. Through a translator, we asked him why he was sitting outside on the street corner rather than on the street. “Because I cannot rent property,” the blacksmith replied. I asked through the translator why that was. The translator dialogued briefly with the man, then replied, “’It’s because I’m Jewish,’ he says.” I said, “You mean he said it’s because he’s Yibir,” thinking surely the translator was either confused or was putting words in his mouth. Another brief dialogue with the blacksmith. The translator confirmed to us, “no, he said it’s because he’s Jewish.”

As I was struggling to process how it was that a man on the street in a Muslim city could possibly have understood that he was being denied the opportunity at a more productive livelihood not just based on a tribal identity but due to a Jewish identity, a young girl came up and grabbed my forearm and shouted something in Somali, looking me straight in the eye. I asked the translator what she had exclaimed, and he said that she had shouted, “you are our uncle!”

In the weeks and months which followed, our unlikely meeting with Sultan Mahamed led to our interactions with members of what was clearly a historically Jewish community struggling to maintain its unique identity amidst poverty, displacement and persecution. This led us to plan and hold our first Medical Outreach among the Yibir and their neighbors. Officials who should have shut the doors on a largely unknown Messianic ministry not only signed the required permissions but committed to make sure of our success and safety. Local medical professionals should have balked at the opportunity to serve alongside Jewish people but didn’t and Christians welcomed the experience and even said to us at the end, “You’ve brought the blessing of God!”

Yibir and Yizak families and community elders who have only known suspicion and persecution from outsiders sat with us in tea shops and under scrub trees and listened to a message that God has not forgotten our people but has come to find us and have mercy upon us.

Our “yes” to the Lord as a ministry, even in our limited understanding, to manifest the heart of the Lord to reach out and regather our people back to Himself, led us to places we would never have imagined and opened doors which no man could seemingly have opened.

As I’ve shared before, I am more excited now about the ministry opportunities and open doors in our reach than I have been in ten years of ministry here at Jewish Voice. The challenges – economic, political, security-related, religious and in regard to spiritual warfare, are tremendous. But these opportunities are simply too incredible to ignore. As I travel around the world doing my part to catalyze outreach and the planting of indigenous Messianic Jewish faith communities on behalf of Jewish Voice, I can’t help but think – and thank the Lord – we just might be a part of the fulfillment of the things the prophets penned and longed to see! I’ll be back in the coming months to share what the Lord is doing through Jewish Voice among the Yibir and with the other Jewish groups with whom we have both new and ongoing ministry opportunities. Thanks for your prayers! For courage, boldness and even more open doors! In Yeshua’s Name.