After two days of Israel defending herself from the heavy rocket fire of the Palestinian Islamic Jihad, a fragile peace was brokered late last week on Thursday morning.

While the numbers still aren’t confirmed, it’s estimated that over 400 rockets were fired along Israel’s southern border.]

Of the rockets fired toward Israel since the conflict erupted early last week, an estimated 90% of rockets heading toward residential areas were intercepted by the Iron Dome. In addition, we’ve also heard that 60% of the rockets that were not intercepted fell in open areas where they caused neither injury nor damage. 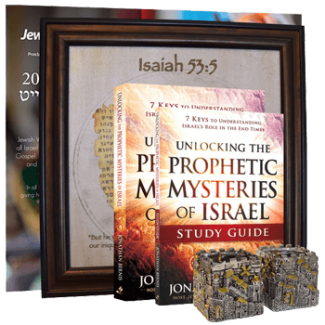 Get the Isaiah 53 Wall Art Package

One of the most powerful Messianic passages in the Holy Scriptures is presented in this beautiful, framed piece of art for your wall. An ancient Hebrew manuscript of Isaiah 53:5 is replicated on an aged parchment-like background.

Even in light of the possibility that violence could be halted, the situation is still tense. Israeli schools within the area remained closed last Thursday. And non-essential work was prohibited. These restrictions have since been lifted.

But the IDF remains on high alert. We’ve heard reports of increased troop deployments along the Gaza border fence – along with a number of artillery batteries and tanks.

The days ahead will be critical. And not just in terms of the conflict in Gaza.

In the midst of a tense week in Israel, Blue and White leader Benny Gantz has announced that he is unable to form a coalition government. Talks with Prime Minister Netanyahu’s Likud coalition to form a unity government were unsuccessful.

We can almost certainly expect the third round of elections – which no one wants. The results will likely be the same as the last two elections.

Even more so, nobody wants a third round of elections amidst the threat of war.

WILL YOU PRAY WITH US?

Please join us as we pray for God to:

As a Believer in Jesus, I hope you’ll go beyond prayer and put your support into action by giving a generous gift to stand with the Jewish people – in Israel and around the world.