“Do not weep!
See, the Lion of the tribe of Judah, the Root of David, has triumphed”

Last week, Israel’s President, Reuven Rivlin, lamented that the days ahead for Israel will be a “troubled time.”

Amidst the constant threat of Iran encroaching on her borders, as well as other radicalized Islamic terror organizations, Israel remains in a political deadlock.

Unity continues to remain out of reach. Compromise doesn’t appear to truly be an option for anyone.

Even though both have publicly said they want to avoid a third vote. 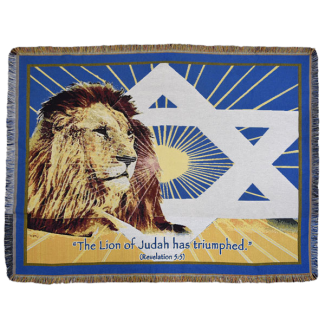 Stand with Israel and the Jewish people!

When you give a gift of $60 or more to provide support for Messianic ministries in Israel and critical resources to Jewish people around the world, we’d like to bless you by sending you our Lion of Judah Afghan Throw. It would also be the perfect gift this holiday season for a friend or loved one!

The mandate to form a government was then given to the 120-member Knesset.

According to reports we’ve received, if no lawmaker manages to get the support of at least 61 members of the Knesset by December 11, elections will be called for the third time in less than a year. If those third elections are called, the date for them to be held would be March 2, 2020.

The Prime Minister has agreed to Likud primaries if a new election is called. This could see Netanyahu replaced as the head of Likud after more than a decade in power.

AND THE THREAT AGAINST ISRAEL REMAINS FROM IRAN

As I’m sure you can imagine, the Jewish people in Israel are certain to feel a sense of frustration. There’s talk of boycotting this third round of elections because the outcome will be no different from what they’ve experienced since April.

And all the while, Israel has been fighting on two fronts against Iran – on the Syrian border and Gaza – which continues to vow to wipe the Jewish State off the map.

Regardless of political stalemate, Israel has no other options but to defend herself. Especially now as Iran’s brazenness continues to increase.

WILL YOU PRAY WITH US?

Please join us as we pray for God to:

As a Believer in Jesus, I hope you’ll go beyond prayer and put your support into action by giving a generous gift to stand with the Jewish people – in Israel and around the world.

GIVE A GENEROUS GIFT

Your gift today will be put to work to provide dental and eye care to Holocaust survivors in Israel.

Your generosity will also be used to rush humanitarian aid, clean water and medical care to the “Lost Tribes of Israel” scattered around the world.

More than that, your support will also help share the Good News of Yeshua (Jesus) with Jewish people in Israel and around the world.

For your gift of $60 or more, we’d like to bless you with our Lion of Judah Afghan Throw.

This beautifully designed afghan throw features a regal lion’s face, the Star of David and shining rays of light depicting the glory of Yeshua (Jesus), the Lion of Judah.

In the corner are the words of Revelation 5:5: “The Lion of Judah has triumphed.” This reminder is critical, especially now during Israel’s long season of political instability.

The reality is, the government in Israel won’t truly be established until Jesus returns and sits on His throne.

Our Lion of Judah Afghan Throw would be an inspiring addition to your holiday season – and the perfect gift for a friend or loved one!

Thank you again for being such a faithful supporter of Jewish Voice. And for your love for the Jewish people in Israel and around the world.