She was fine for the first three months of her life. But at six months, the baby started showing signs that something wasn’t right. By 18 months, it was clear to everyone that something was wrong with the little girl from Kechene in Ethiopia.

Her father thought she was cursed. So, he left, washing his hands of any responsibility to love or care for the girl and her mother. Desperately poor after he abandoned them, the mother had no choice but to seek work in the greater Addis Ababa area, of which the Kechene community is a part. She moved away, leaving her daughter in the care of the child’s grandmother and sending money home to support her.

Now, at 3 years old, the girl didn’t walk or communicate. Grandma had to carry her bundled on her back like a baby. The woman was frail, and carrying a 3-year-old was a burden on her tired body. When she heard about the Jewish Voice Specialty Clinic taking place in Kechene, she brought her granddaughter hoping that one of the specialists could help her.

They came on the first day, but by the time they arrived, the lines were already long. They waited all day but couldn’t get into the Clinic to see a doctor. The next day, Grandma gathered up the girl and came early. Her diligence paid off, and they finally entered the Clinic to sit down with a physician.

Jewish Voice staff member LaTricia happened to be in that department at the time of their visit. She observed as the doctor explained the diagnosis: the girl has autism, a condition familiar to LaTricia as she had worked as a provider in that field at one time.

They discussed characteristics of autism and identified that the little girl could indeed walk; she just didn’t want to. The doctor moved the girl’s limbs showing that they are functional. As he did, she objected with fussing and crying. “She wasn’t in pain,” LaTricia recalled. “She was mad.” 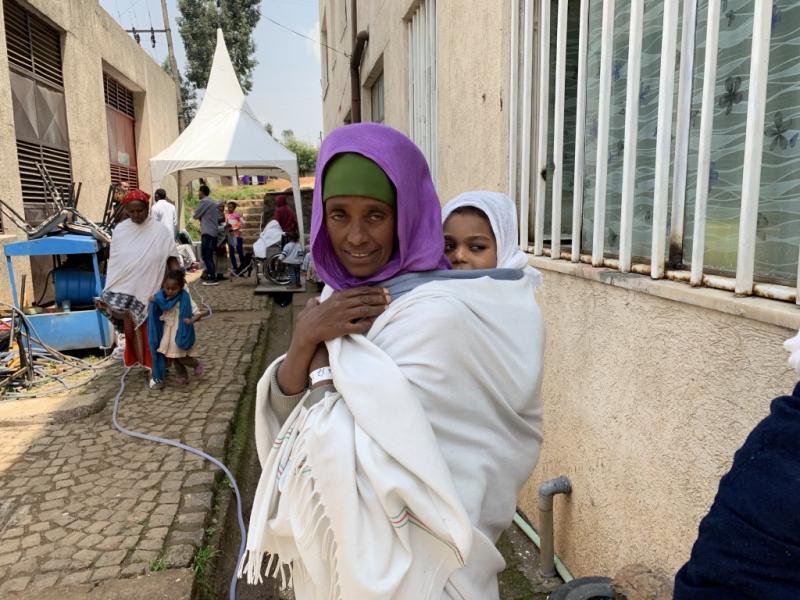 The doctor coached the woman how to help her granddaughter re-establish mobility for herself. “But she throws a fit when I try such things,” the woman said through a translator. They assured her, this was normal for autism.

As the doctor continued working with the girl, the little patient obliged to demonstrate just what her grandmother was talking about. Instinct from past years kicked in for LaTricia, and she reached over to gently squeeze the little one’s arm. Instantly, the girl stopped crying. All around the examination room, eyes widened and jaws dropped. “What did you just do?” the doctor asked.

LaTricia calls it “squeeze therapy,” understanding that the gentle pressure is soothing for autism patients. The doctor tried it on the girl, and it worked for him too. Every time he lightly squeezed his patient’s arm, she stopped crying. But when he released, she cried again.

With pleading eyes, the grandmother eagerly grabbed LaTricia’s hands and placed them on her own arms, wordlessly asking, Show me! Do it on me! Show me what you did! LaTricia taught her the right amount of comforting pressure to apply that would calm the girl.

It was a priceless gift. Such a small piece of information amid the Western world that is filled with specialists, therapists and a pool of knowledge about autism, it was the first effective help this grandmother had ever received concerning her granddaughter. And she was thrilled.

We know there is so much more that would help this family, and we ache that it’s simply not available to them. Western parents of autistic children find hope, strength and support in community. They find help for their children through the tips and insights learned by others.

In a third world country, there are no such educational classes available, no assistance programs and no support groups. This grandmother is alone. She has no help in coping with the complex mystery going on in her precious granddaughter. But this simple calming technique opened up a world of hope that has already changed their lives.