Christians know it as the Feast of Weeks, or Pentecost. But for Jewish Believers in Yeshua (Jesus), Shavuot has an even more special significance.

You see, just as God poured out the Ruach HaKodesh (Holy Spirit) at Pentecost, He is pouring out His Spirit today. With signs, wonders and miracles, He is calling His Chosen People to embrace their Messiah. 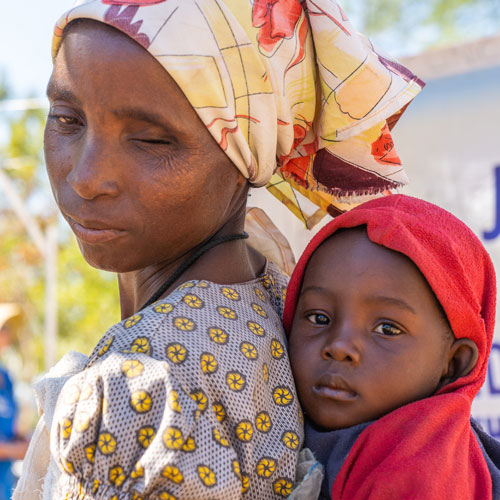 You and I get to be part of that.

We’ve been chosen to carry His message to His people scattered among the nations - to many, like Astelda, who are desperate for help and hope.
We met Astelda at an Outreach in Gondar, Ethiopia. You only had to look at her to know she was in agony.

For years, Astelda had been plagued by terrible headaches. Her body cried out for relief, but the pain that gripped her soul was worse. After suffering so long, she was overwhelmed with sadness. Depression had a hold on her. And it would not let her go!

We did what we could for her at the Medical Clinic. But there was only so much the doctors could do. So Astelda sought comfort in the prayer tent.

It was there, in a tent at the edge of our Clinic dedicated to prayer and counseling that she found relief.

For the first time in her life, she heard about the love of Jesus. You see, Astelda is a member of the Beta Israel, one of the “Lost Tribes of Israel.” To this day, although they live in Ethiopia, Astelda and her people maintain distinctly Jewish beliefs and culture. But, until that day in the prayer tent, no one had ever explained to her that Jesus is the Messiah of whom the Jewish Scriptures speak.

God did a work in her heart. Astelda believed. She went home feeling hopeful. But nothing could have prepared her for what God was about to do.

Later that night, her pain suddenly left her. Her sadness and depression vanished. Her soul was at peace.

And then, as Astelda rejoiced over her healing, God spoke to her in a vision. He showed her she must return to the Clinic, thank the woman who had prayed with her and, most important, give glory to His Name.

Heaven and earth rejoiced on that day. “I could barely recognize her because she had changed so dramatically,” Astelda’s counselor remembers. “She was radiant!”

But what happened with Astelda is only a small part of what God is doing to return His people to His kingdom. They may be the “Lost Tribes of Israel” to most of the world. But He has known all along where they are.

This is why I am so excited that Shavuot is just around the corner again. It’s a festival that says so much about God’s faithfulness and love for His people.

On that day, God kept the promise He made to Jeremiah: “But this is the covenant I will make with the House of Israel after those days” - it is a declaration of Adonai, “I will put My Torah within them. Yes, I will write it on their heart” (Jeremiah 31:32, TLV).

So I ask you, what could be more faithful to the meaning and message of Shavuot than to carry the Good News of the Messiah to the remote, “Lost Tribes of Israel”?

He can heal them miraculously like He healed Astelda. But He also wants us to be instruments of healing. Your generous support of Jewish Voice today can provide:

Each $30 you give today will reach one Jewish person or their neighbor. And that last part is critical, because, as the Day of Pentecost made clear, the Good News is no longer for one group of people only, but for all people.

It is for the Jew first, but also for the nations!

This is the Good News your gift will help share. The driving force behind everything we do is our desire to see all Israel saved -- and to reach as many of those who live alongside them as God, in His providence, will allow.

Won’t you do your part today to help give as many as possible the opportunity to place their faith in Yeshua?

For your gift of any amount, I’d like to send you a gift that I think will be very meaningful - not just during Shavuot, but also as you celebrate the rest of the biblical feasts. It’s an attractive set of seven Biblical Feasts Tent Cards. They beautifully explain the prophetic significance, traditional observance and Messianic fulfillment of each of the major feasts