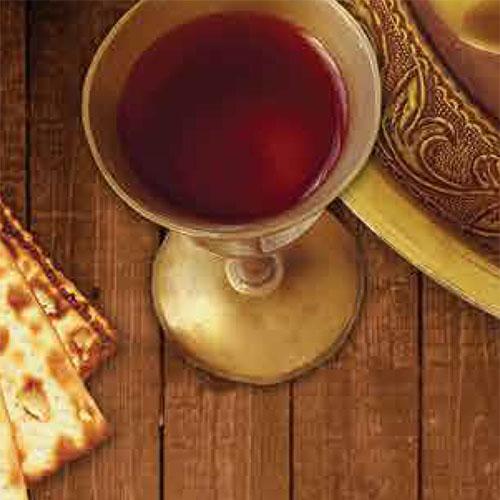 9 Questions – and Answers – About the Biblical Feasts 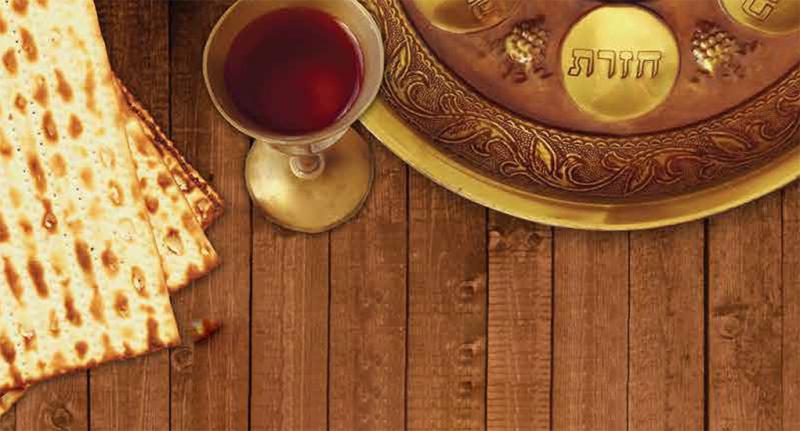 How much do you understand about the Feasts of the Old Testament Scriptures or their importance to us today? If you’ve never learned about the rich, biblical significance of these festivals, you may be missing out on a more complete understanding of who our Messiah really is.

Test your knowledge here: I ask—and answer— nine questions about the Biblical Feasts found in the book of Leviticus. I hope this whets your appetite to learn more about this important subject. I also hope it will encourage you to consider reading our latest book, The Spring Feasts & Purim.

And, speaking of appetites, the book also includes recipes so that you can easily prepare and serve popular traditional dishes that are appropriate to each feast!

So take a few moments to see how much you know, and then order your copy of this small but important book, and you’ll learn so much more!

(And watch for the Fall Feasts sequel, coming soon!)

Q. What are the feasts and where are they found in the Scriptures?

A. They are listed below: 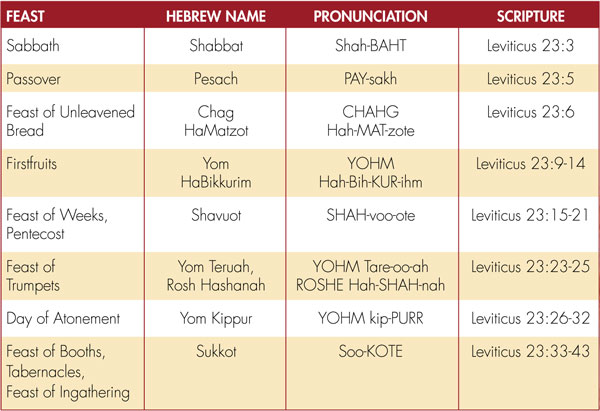 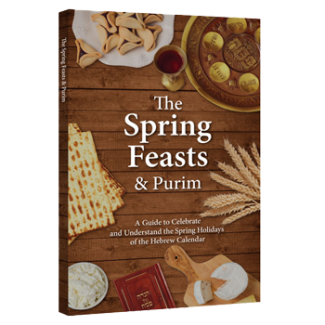 Get the The Spring Feasts and Purim Book

You’ll learn the history and prophetic significance of each Spring Feast and the meaning it holds today for Believers in Yeshua. Holiday recipes will help you celebrate the Springs Feasts and Purim. Discover what God’s appointed times hold in store for you.

Q. I thought Purim was a Spring Feast, but I don’t see it listed in the chart. Why not?

A. The table below lists the cycle of feasts that are part of the annual Jewish calendar. Both Purim in the spring and Chanukah in the winter are additional observances added later in Jewish history. Both commemorate occasions when God delivered the Jewish people from destruction. Purim celebrates the salvation of the Jewish people from wicked Haman’s plot to annihilate them in Persia. Chanukah commemorates when God rescued His people from Antiochus IV and the Seleucid armies in the time of the Maccabees. According to legend, a miracle occurred, making one day’s worth of Temple oil last eight days until more could be made and consecrated.

Q. Whose feasts are they? Do they belong to the Jewish people?

A. “These are My feasts,” God told His people. The Hebrew word moad (MO-ed) means “appointed time,” the plural being moadim (MO-eh-deem). God was telling Israel, “I want to meet with you.”

Although these moadim are the primary celebrations of the Jewish people, they prophetically point to the Messiah and are the inheritance of every follower of the Messiah, Jesus, as sons and daughters of Abraham.

Q. What are the purposes of the feasts?

A. The Feasts of the Lord commemorate His faithfulness and the many miracles of deliverance He performed in setting apart Israel as His own people. They serve to remind God’s people of His holiness, their own impurity and that, in spite of the disparity between them, God wants them to be in fellowship with Him. He wants them to draw near. That requires obedience, thanksgiving and sacrifice. These moadim are also designed to fulfill the obligation to hand down to our children the knowledge of God and His work of deliverance and redemption in our history. 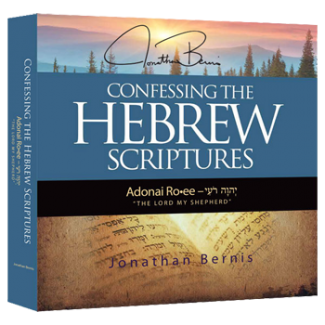 Get the Confessing the Hebrew Scriptures: The Lord My Shepherd Book

Throughout Scripture, God presents Himself as a good shepherd who cares for His flock. He nurtures, protects, guides and comforts us. In this fifth volume of Jonathan Bernis’ Confessing the Hebrew Scriptures series The Lord My Shepherd you’ll find breathtaking photographs alongside inspiring verses from the Old and New Covenants.

Q. How important were the feasts in the lives of the people of Israel?

A. The Feasts formed the annual life cycle of the Israelites. In spring, they commemorate the great deliverance of Passover, God’s provision of lifesustaining food, and the giving of the Torah (TORah) that set them apart as a nation unto Him. In the fall, they celebrated their rest with the blowing of the shofar, or trumpets; made sacrifices for and received atonement for their sins; and remembered His presence with them when He caused them to live in tents in the wilderness. These appointed times set the rhythm of life for the Israelites and for the Jewish people today.

In ancient times, the men of Israel traveled great distances to Jerusalem three times a year to observe the “pilgrimage” feasts of Passover, Shavuot and Sukkot. The feasts, along with the Shabbat, are foundational to Jewish life.

Q. Are the feasts only about Israel’s ancient history, or do they have meaning today?

A. Each of God’s appointed times does remember a specific historical event. And each festival also reveals His plan of redemption and points specifically to the Messiah. Into His feasts, God wove not only a commemorative meaning that looks backward in remembrance of what He has done, but also a prophetic significance that looks forward to what He plans to do, including both Comings of the Messiah. Therefore, these feasts are relevant to every Believer.

The Hebrew word moad can also be translated as “rehearsal.” A rehearsal happens before the “real” event and is a form of practice designed to prepare for it. The Lord’s appointed times are rehearsals! He instructed His people to observe these “practices” throughout all their generations.

Q. Other than the time of year, are there specific differences between the Spring and Fall Feasts?

A. All the feasts have their own unique meaning and are tied primarily to the agricultural cycle. Passover commemorates the Israelites’ exodus from Egypt, and therefore begins their redemptive history. Shavuot is the first harvest celebration.

For followers of Yeshua, the Spring Feasts point backward to Yeshua and reveal the redemptive plan of a God who is always reaching out to His people. They have reached their fullness in the revelation of the New Covenant. The Spring Feasts are commemorations and appointments to remember God’s faithfulness to Israel and those who have now come into His salvation through the Messiah.

The Fall Feasts have not yet been prophetically fulfilled. They will be fulfilled at Yeshua’s Second Coming. All the feasts of Leviticus reflect on a God who continually calls us to look back and remember what He has done as well as eagerly look ahead to the fulfillment of His future promises.

Get the The Spring Feasts and Purim Book

You’ll learn the history and prophetic significance of each Spring Feast and the meaning it holds today for Believers in Yeshua. Holiday recipes will help you celebrate the Springs Feasts and Purim. Discover what God’s appointed times hold in store for you.

Q. How is the Jewish calendar different than the one we utilize today?

A. Most of the world uses the Gregorian calendar in which a year contains 365 days, begins in January, and runs through December. This system is based on a solar year, the time it takes the earth to orbit the sun. The Jewish calendar, however, is based on lunar cycles with each month beginning on the new moon.

This makes a Jewish year shorter than a Gregorian year. To compensate and stay in sync with the seasons of a solar year, much like a Leap Year, every 7 out of 19 years, the Jewish calendar includes a 13th month called Adar II. While Jewish holidays fall on the same Jewish calendar date each year, their appearances on the Gregorian calendar vary from year to year.

There is another difference between the two methods of documenting the passage of time. In the Gregorian system, a day starts and ends at midnight. In the Jewish order, a day follows the Bible’s account of Creation, beginning and completing at sunset.

Q. In what way is it appropriate for nonJewish Believers to take part in the feasts?

A. As Believers in Yeshua celebrating the Feasts of the Lord, we commemorate God’s provision in Israel’s history and the miracles He performed to deliver and preserve them.

God gave us the whole of Scripture. The Word, in turn, gives us reason and permission to understand and enter into His Feasts as part of the Jewish roots of our faith in Yeshua. Since the feasts all point to our Messiah and Savior, Jesus, in some way, they are the inheritance of every Believer in Jesus.

To overlook His Feasts as obsolete or irrelevant is to potentially miss the wonder of His redemption story meticulously told across thousands of years and through all generations.

Q. Did Jesus celebrate these Feasts?

A. Three times a year, God’s people were commanded to travel to Jerusalem and bring their firstfruit offerings of the season. Passover, Weeks and Tabernacles are the pilgrimage feasts when all who were physically able went up to the Temple to celebrate together.

During His lifetime, Yeshua observed the feasts and, as a child, these three pilgrimage feasts comprise the festivals that took Yeshua (Jesus) to Jerusalem during His life and ministry. It was during the Feast of Passover that He made his final trip to Jerusalem, when He made the triumphal entry into the city on what Christians commemorate as Palm Sunday and finally, a week later, was crucified, died and rose again.

But even more, the feasts have everything to do with Messiah Yeshua. He is the Firstfruits. He is the Sacrifice, the ultimate and perfect Passover Lamb. He is our Shabbat, our Sabbath Rest.

Get the Confessing the Hebrew Scriptures: The Lord My Shepherd Book

Throughout Scripture, God presents Himself as a good shepherd who cares for His flock. He nurtures, protects, guides and comforts us. In this fifth volume of Jonathan Bernis’ Confessing the Hebrew Scriptures series The Lord My Shepherd you’ll find breathtaking photographs alongside inspiring verses from the Old and New Covenants.

A Good Map Makes for an Easier Journey 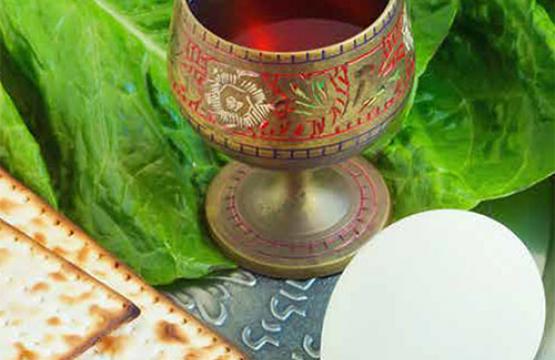 A Good Map Makes for an Easier Journey