The view was spectacular. Reminiscent of the Grand Canyon, the spacious expanse of Tach Gayint, Ethiopia spread out in front of us. We were 8,500 feet above sea level, and it was breathtaking in every way.

Yet in the midst of this incredible beauty were broken hearts and desperate souls. There were families in need of clean water and urgent medical care. There were Jewish communities being persecuted in ways we, at Jewish Voice, had not witnessed on any recent outreach.

This outreach did not come without its challenges. Our clinic location was remote, over five hours by car from the nearest major city. The region has experienced severe drought and famine over the last two years, so people have been suffering greatly. Additionally, the Jewish community has been persecuted severely by the anti-Semitic groups in the area who hold superstitious beliefs about the local Jewish community.

Yet as we set up the clinic in a hospital that was still under construction, locals came rushing to help us. They were eager for the care we were about to provide and thanked us over and over again for being there with them. It was a humbling experience and an early indication of what would be one of the most challenging and rewarding weeks in Jewish Voice’s history.

On the first day of the clinic, hundreds of people were already lined up by sunrise, and the response continued to be overwhelming. Over 600 patients were treated in just that first day, and more than 60 received supernatural healing. We serve a miraculous God!

As the clinic week continued, more and more lives were touched. In the months of preparation leading up to the outreach, our team had consulted with local health officials who told us that one of the greatest medical needs in this remote area was eye care. Because of this information, we doubled the number of optometrists and surgeons. Our medical team was able to see nearly twice as many eye patients at this clinic and perform twice as many eye surgeries, including cataract removals, as compared to our average clinic.

One such treatment that we performed was trachoma surgery. Trachoma is a bacterial infection that causes scarring in the eyelid. It causes the eyelid to invert, and the lashes then scratch the eye. As you can imagine, a person who has this condition suffers much pain, and it is the second leading cause of blindness in Ethiopia. We cared for several people who had trachoma. What a blessing it was to help them!

On one of our final days in this area, a portion of our team visited a remote Bete Israel community situated in the mountains. The roads leading there were only one lane and in complete disrepair. Reaching the village then required a hike of three kilometers up a mountain at 8,500 feet elevation.

It was a difficult journey. Even so, upon arriving we were so glad we made the effort, although what we discovered there was truly heartbreaking.

We immediately heard stories of the extreme persecution these amazing people routinely experience at the hands of people from other villages. We learned that due to their Bete Israel identity, their children were forbidden from attending local schools. The surrounding communities rejected the livestock and pottery the Bete Israel would try to sell, making it difficult to earn any kind of living. We met a woman whose body bore the scars from severe burns on her right side (from shoulder to hand). Due to the superstitions that fuel the hatred from other communities in this area, we learned that her house had been set ablaze several years ago simply because she was Bete Israel. She was left to burn to death inside, but managed to escape with her life.

We visited another remote Bete Israel village and found similar levels of suffering and persecution there. In each case, we prayed for many and shared the Gospel.

As the medical clinic neared the last day, we dealt with daily opposition from some among the local population. One of our supply vehicles was even stoned, but what God did in the midst of these hardships was above and beyond anything we could have ever imagined.

For example, through the outreach, more than 11,600 patients received medical treatment and more than 200 individuals prayed to receive Yeshua ( Jesus) as Messiah!

This was a week unlike anything we had ever experienced. A week of removing barriers (both literally and spiritually) from fields and pioneering the first step in a long-term relationship with this community. A community we believe (in faith) where much seed has been sown and a great harvest will be raised for the Lord in the years to come!

Thank you for making this possible and making a difference in so many precious lives! Thank you for helping us take a stand against anti-Semitism and at the same time deliver the Good News of the Messiah to so many. Now you know what we discovered in Tach Gayint—that the enemy is actively pursuing and persecuting Jewish People there and that they desperately need our aid and support. And with your help, we’ll be there for them.

Our mission to help these people is not over. There were still hundreds waiting to be seen when we reluctantly closed the clinic on the final day.

We know that prayer has the power to alter the spiritual destiny of Tach Gayint, to bring peace to this conflicted region. We are confident that with your faithful prayers and support, we will see the circumstances of the scattered Tribes of Israel in this region transformed through the love and power of God.

Please, continue to actively pray for protection and encouragement for this community.

One evening, as we were nearly finished setting up for the outreach, a woman approached the gate. It was pitch black outside, but she had left her home and family because she was trying to find a lost sheep and wouldn’t rest until she found it.

This encounter served as a beautiful reminder of what our “Good Shepherd” does for us and what He calls us to do each and every day: Go after those who are lost, in need, and have strayed from His love and protection, and help them in the name of Yeshua.

Friend, let’s continue in the months to come to minister to thousands of “lost sheep of the House of Israel,” and proclaim the Good News of Yeshua like never before. These precious people are being persecuted beyond belief and are ready to receive God’s love and the Gospel.

Thank you for answering His call. Thank you for being His voice. After this outreach, we are more committed than ever to reach more lives and touch more Jewish communities with the hope found in Yeshua. Your faithful prayers and generous support are making a difference! 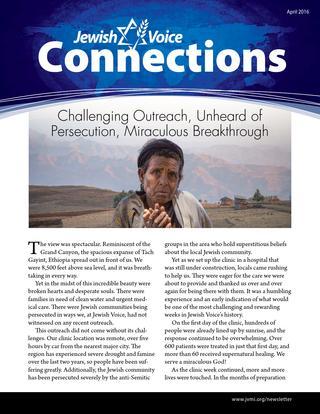