A Divine Appointment in Mberengwa

This wasn’t Kris Repp’s first medical outreach with Jewish Voice. The 15-hour flight like the one from New York to Johannesburg was nothing new...neither was the four-hour flight to Bulawayo, Zimbabwe, or the bus ride over bumpy, rough roads to Mberengwa. She’d been on van rides like this before, down bumpy dirt roads out into rural parts of Zimbabwe where we made our camp. No running water. Bucket showers. Bucket toilets. As our nursing station director, she was very familiar with how it all worked. She’d seen it all before....or at least that’s what she thought.

On the fifth day of our medical outreach in Mberengwa, Kris wasn’t sure what she was seeing. Off in the distance, a group of five men were approaching our clinic, and they seemed to be carrying something. As they came closer, it became clear. They were each holding part of a pink blanket, carrying a man too sick to even walk.

Kris rushed over and grabbed part of the blanket to help bring the man to the clinic. The patient was 34-year-old Matthias, and he was stricken with late stages of AIDS- related illness. Unfortunately, he’s one of many in Zimbabwe. Sadly, people suffering from the effects of HIV and AIDS are found all across the country, and the Mberengwa district is no exception.

The first cases of AIDS in Zimbabwe were discovered in the mid-1980s. Today, the country is experiencing an HIV epidemic with nearly one out of every four adults (age 15- 49) infected. Each day, more than 550 adults and children in Zimbabwe become infected with HIV. The total number living with HIV and AIDS is estimated between 1.5 million and 2.0 million people.*

Over a million Zimbabwean children have lost one or both parents to complications of AIDS. HIV infection rates in Zimbabwe continue to be among the highest in the world.

Matthias was in very bad shape. He was emaciated,withered down to skin and bones. He was dying from the debilitating opportunistic infections and diseases that can develop as the immune system weakens. Immediately, Kris knew the sad truth. Nothing could be done medically for Matthias. It was only a matter of time before he would lose his battle.

Our team saw that he was wearing traditional witchcraft bands on his wrist and ankle. He was in another fight, a spiritual fight, and time was running out for Matthias. But the Lord had a plan. That’s why He orchestrated bringing him to our clinic on this very day. It was a divine appointment.

Another outreach partner from our prayer team came immediately to his side. She began to share with Matthias the hope and reality of eternal life with Yeshua. For perhaps the first time in Matthias’ life, he heard that someone loved him with no conditions, exceptions, or reservations. And that “someone” was Yeshua the Messiah. Unlike so many others who looked on him with fear, disgust, or pity, Matthias was overwhelmed with the love of God, his Savior, his Messiah welcoming him with open arms. What happened that day at the clinic in Mberengwa felt like a story right out of the Gospels.

And just like the Philippian jailer in Acts 16, Matthias and his whole family accepted Yeshua as Messiah!

It was a short time later that Matthias passed peacefully into the arms of His waiting Lord. Instead of his sickness ending his life and dragging him into eternity separated from God, because of that divine appointment, Matthias accepted the Lord as His Savior.

I am SO grateful we were there and able to witness to Matthias. But his is just one of the thousands of lives you were part of reaching through our outreach in Mberengwa.

Joseph, a local man who was serving as one of our drivers, went to the prayer tent to ask for prayer. He told one of our prayer partners, Patrick, that he had been watching our outreach team for the past three days. Joseph said, “I want what you people have . . . There’s something special about what you people believe in.” Patrick shared the Gospel with him, and that very day, he prayed to receive Yeshua as Messiah. Later that day, he was baptized!

Because of your faithful generosity, nearly 8,500 patients came through the medical clinic in Mberengwa with over 1,000 pairs of eyeglasses distributed and over 1,100 patients receiving dental care. More than 1,000 individual LifeStraws® were provided, including nearly 40 family units.

But most importantly on this trip to Mberengwa, more than 750 people prayed to receive Yeshua! Praise God and thank you for your vital partnership with Jewish Voice Ministries.

Through your prayers and generous financial gifts, together we’re touching lives in Mberengwa and in some of the most remote parts of the world. You are truly being His voice to the nations.

We’ve heard some people call our outreaches “medical missions,” but that’s just where it begins. Our medical outreaches minister to an individual person, a community, and even a nation. We know your heart is to give to demonstrate your support for Israel and the Jewish People. We know the work we do is important to you because it’s important to God. Our next outreach is planned for July 21—August 1, 2016, and we desperately need your continued support and prayer before and during this outreach.

The Lord is leading us to make another medical outreach trip to Gutu, Zimbabwe, where we will have tremendous opportunities to provide medical care and share the Gospel with the Lemba tribe. This will be our third trip to Gutu.

Gutu is an impoverished area much like Mberengwa that urgently needs our help. This was evident when we were there last year, and over 10,000 patients were seen in just one week! That’s over 10,000 individual lives that witnessed the love of Yeshua through the compassion of strangers who came from across the world to help them in His name.

We are so grateful He has placed it on your heart to stand with Jewish Voice through your prayers and partnership! And please remember to continue praying for the patients and families in Mberengwa. Outreaches and medical missions bring physical restoration to thousands, but their spiritual needs don’t end when we return home. Please pray for lasting spiritual fruit in these precious lives. The need is great, but with your help we will continue to bring the hope and healing message of Yeshua to the lost and hurting. 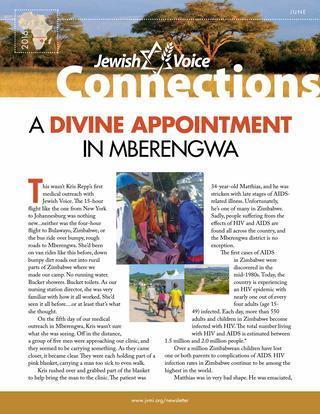