The Lights That Won’t Burn Out

My family and I live in the American southwest, which means we don’t see much snow during the Holiday season. In fact, we usually don’t see any. But I grew up in Rochester, New York, where winter meant many long months of gray skies and snowstorms.

While I don’t miss having to scrape the frost off my windshield or feeling my fingertips freeze in the bitter wind, I do sometimes miss the winter weather. I’ve always been captivated by the mathematics of snowflakes – how do a million unique geometric patterns come together to create a seamless blanket of white?

In fact, snowflakes are an example of what is called a fractal: they consist of never-ending, repeating patterns. They are triangles in triangles and right angles branching off of other right angles. You might not know it, but you’ve seen fractals before: think of the branches of a tree, each one a smaller version of the one it’s growing from. Or a bolt of lightning, with many smaller streaks of electricity branching off the middle.

Maybe it’s appropriate, then, that snow falls on much of the world during the season in which the Jewish people celebrate Chanukah. Not only does Chanukah offer us a picture of God’s miraculous provision for His People, but I believe this mysterious Feast is also part of a pattern we see unfolding all throughout history.

The stories of the Bible, from the Old Testament through the birth of the Messiah, Jesus, each have unique details – their own characters and times and places. But taken together, these stories paint a cohesive picture of a God who loves and sustains His people against all odds. They show us a God of Miracles. The story of Chanukah is one of those miracles.

The Story of Chanukah

During this period, we know – thanks to other historical writings – that a Greek empire laid siege to Jerusalem. Here is another pattern that repeatedly occurs in the Bible: the Jewish people flourish; then the Jewish people fall. This time, the people of Israel fell beneath Antiochus IV Epiphanes, a Greek king who went on to conquer most of the Middle East. He, too, was to follow a pattern.

Like other brutal conquerors before him, Antiochus hated that the Jewish people worshipped the One True God. That anti-Semitism fueled a barrage of unspeakable desecrations: Antiochus and his army slaughtered men, women and children all across the Holy Land. He defiled the Temple in Jerusalem, which in those days was the very dwelling place of God on earth. He carried away the golden altar and the holy candles and treasures of the Temple, each laid out according to the detailed instructions of Moses’ Law, and he erected a statue of Zeus in their place. Antiochus declared Israel’s system of sacrificial offerings to God illegal, and he told his armies to hunt down any man who would not bow down to Zeus.

Antiochus was barbaric, but he was not original. In fact, I believe this great hater of the Jewish people was one of the antichrists described in the prophecies of the Book of Revelation. An antichrist is someone who sets himself up as an eternal enemy of God, His plan and His People. I believe there have been many such antichrists in history, including Pharoah, Herod and Hitler. These evil men shared an overwhelming commitment to the destruction of the Jewish people. But it’s more than that: they were committed to thwarting God’s plan of redemption for the world. Because that redemption comes through a Jewish Messiah, it makes sense they’d seek to destroy the Jewish people!

So for Jewish men, women and children during the time of Antiochus’ conquest, to be one of God’s Chosen People was to be vulnerable. The same is true in our day for all who believe in Yeshua.

Back to the story of Chanukah.

After desecrating the Temple, Antiochus sent bands of soldiers to hunt down Jewish families who refused to bow to Zeus. In an Israeli city called Modi’in, his soldiers clashed with a group of Israelites called the Maccabees, led by a priest named Mattathias. They refused to worship any God but the Lord.

In what very well may be the first recorded example of guerilla warfare, this ragtag group of faithful Maccabees somehow defeated Antiochus’ army. I say “somehow;” but of course we know how. The God of the universe gave them the victory. Here is yet another pattern of Scripture: when the odds are insurmountable and human strength is simply not enough, God delivers His people.

After the Maccabees’ incredible victory, the Israelites immediately sought to right the ugly wrongs committed by Antiochus in the Temple. They brought their candles and the altar and the treasures back. They cleared away the statues of Zeus and the pig’s blood (in his insatiable appetite for evil, Antiochus had slaughtered unclean animals inside the Holy of Holies to spite God). When the Temple was cleared and ready for rededication, the Maccabees prepared to relight the lamp. This was the menorah, which was the seven-branched candelabra that burned perpetually in the Temple in accordance with the Mosaic Law.

There was just one problem.

There wasn’t enough oil left in the Temple to light the lamp. The Israelites knew they could make more, but it would take at least seven days to prepare it. What could they do? They had enough for one night; maybe two. So they lit the lamp, praying that God would honor their attempt to obey the Law.

If you are hearing this story for the first time, stop for a moment and try to predict what happens next. We just saw God deliver His people from destruction, despite impossible odds. We know God is zealous for His people and His name. This God is no mere statue or myth. He is a living and active God – a God who will accomplish His plan. A God of miracles. Is it any wonder, then, that He would provide for His people here, in this small moment, as they’re earnestly trying to rededicate His Temple?

He did. In what’s now considered the central miracle of Chanukah, the Temple lamp somehow burned for eight nights, even though there was only enough oil for one. This is why our Chanukah menorahs have nine candles: one is known as the “shamash,” or the “servant” candle, because it is used to light the others each night. The rest are lit in succession, one for each miraculous night that the temple lamp continued burning even without any natural source of fuel. This is why Chanukah is called the Feast of Dedication.

My friends, the story of Chanukah is a fractal: it is one branch in a repeating pattern of God’s faithfulness. The details are unique and surprising: a valiant army led by a brave priest. A bloodthirsty tyrant bent on destruction. A lamp that burns much longer than it should. But the pattern is also recognizable: God has a plan for the redemption of the world, and that plan rests on the survival of the Jewish people (because the Messiah comes through them!). God will accomplish His plan; which means the survival of His people is sure. As Paul wrote to the Romans: “If God is for us, who can be against us?” (Romans 8:31). That means that even when the odds seem insurmountable, God can alter the natural laws of the world – that is what we mean by a miracle – to accomplish His good purpose.

My friends, as you light your menorah (also called a Chanukiah) this holiday, I don’t know whether you’ll see snowflakes floating to the ground outside your window or if you, like me, will be surrounded instead by the rocky dust of the desert. But wherever you are, I hope you treasure the miracle of Chanukah for what it is: a miracle that points to the ultimate miracle – the redemption of the world through Yeshua.

In John 8, Yeshua tells His followers that He is the “light of the world” (John 8:12). This Jewish Messiah broke the laws of nature – He was born to a virgin and He rose from the grave – in order to fulfill God’s plan of redemption. Chanukah was a clue – like a shadow – of this great miracle that was to come. In fact, if Chanukah had never happened, and Antiochus had succeeded in destroying the Jewish people once and for all, Yeshua could never have come!

But in His Sermon on the Mount, Yeshua said something very different about light. He told his followers, “You are the light of the world” (Matthew 5:14). Like the shamash candle on our Chanukiahs, Yeshua now offers us the chance to bring light to the world in this time and this place. And when we suffer, we have all of the evidence we could ever need to remind us that God will sustain us. We have the patterns of Scripture. We have the story of Chanukah. Yeshua’s saving light – which we share with the world when we share the Good News – will always keep burning, because the God of the universe “neither slumbers nor sleeps” (Psalm 121:1).

How Does Chanukah Inspire Your Faith? 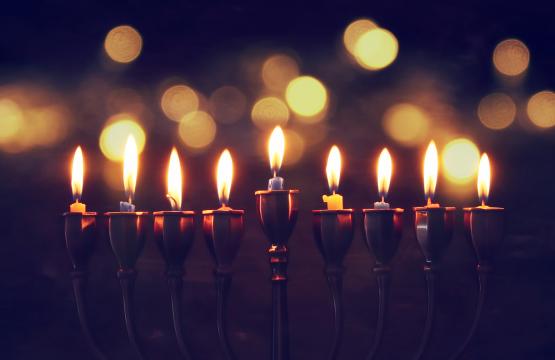 How Does Chanukah Inspire Your Faith?