The Oldest Hatred
by Jonathan Bernis

Six years ago, I traveled to Kiev, Ukraine, with a team of Jewish Voice staff, volunteers and artists for a Hear O Israel! Festival of Jewish Music & Dance. These Festivals are one of the many highlight of my ministry. I have the privilege to gather with teams of incredibly talented people – singers, dancers, choreographers, musicians and more – to share the love of Yeshua (Jesus) with Jewish people and others across the world. Traveling to Kiev in 2014 was especially meaningful. Ukraine is home to hundreds of thousands of Jewish people – including many Holocaust survivors. It was an honor to share my testimony with them and invite them into a relationship with our Savior.

During the days leading up to the Festival, my team and I took a break from our rehearsing to visit a sobering site: Babi Yar. Just a few miles outside downtown Kiev, it looks today like a peaceful ravine. There are a few sloping hills, hemmed in by a small forest. It was early autumn when we visited. It might even have felt peaceful – if we didn’t know what had happened here 79 years ago.

This was where Nazi forces, just a few days after marching into Kiev in September 1941, herded nearly 34,000 Jewish people to their deaths. It’s difficult, even now, to describe the scale and horror of what happened. Sadly, it’s a scene that played out all over Europe during the Holocaust. SS troops marched the tens of thousands of Jewish people to the bottom of the ravine, forced them to remove their clothing, and then brutally shot them in cold blood. The Germans then buried the bodies in the soil of Babi Yar.

The day we visited this site in 2014, we were mostly quiet as our guide led us out of the ravine. But as we made our way back toward the city center, I saw something that stopped me cold in my tracks. On the concrete sculpture that serves as a memorial at Babi Yar’s entrance, someone had spray painted something. I inched closer. It was a swastika.

It seems nearly impossible that this kind of brute anti-Semitism is still active in our modern day. But, my friends, it is.

When U.S. President Donald Trump moved the American embassy in Israel from Tel Aviv to Jerusalem in 2017, his administration reaffirmed Jerusalem’s place as the true and historical capital of Israel. But did you notice the global response? Those who respect the Jewish people’s right to exist rejoiced. Those who wish for their destruction were indignant. That anger has its root in the same age-old hatred that prompted a spray-painted swastika at Babi Yar in 2014: anti-Semitism.

This is why elections matter. In this article, I want to focus our attention on the upcoming U.S. elections in less than 2 months. What’s the connection between the U.S. elections and anti-Semitism, you may ask? It’s our great privilege as U.S. citizens to vote and to influence the direction our country takes – including whether or not we support the right of Jewish people across the world to not only exist, but live freely.

My counsel to you is simple: this dangerous cultural stain of anti-Semitism, which persists to this day, should not intimidate us. But it should inform how we vote. Israel does matter, and each candidate’s intent to strengthen or weaken U.S.-Israel relations should be a key factor as you cast your ballot a few weeks from now.

Each year, we lose more and more Holocaust survivors. And each year, I become more concerned
that we’re losing our collective memory of what happened.

In 2018, the Conference on Jewish Material Claims they asked Americans to name just one of the nearly two dozen concentration camps that Germany set up across Europe during World War II. The results were troubling, to say the least: researchers found that nearly half of those surveyed couldn’t name a single one. Among millennials – people between the ages of 24 and 39 – that number was even higher.

Maybe this reprehensible “forgetting” bears part of the blame for the rise in anti-Semitism that we’re seeing now. Don’t get me wrong – anti-Semitism is a hatred as old as dirt. Tucked into the very first books of the Bible are stories of people stewing in hatred for God’s Chosen People. But consider some of the stories we’ve seen make headlines in just the past few years:

On October 27, 2018, a neo-Nazi with anti-Semitic views stormed into Pittsburgh’s Tree of Life synagogue and started shooting. He killed eleven people and wounded six more before a SWAT team cornered him, and he surrendered. That’s when he allegedly told police that he wanted “all Jews to die.” It was the deadliest attack on the Jewish Community in the history of the United States.

Meanwhile, just this past February, photos from Carnival parades in Spain and Belgium looked like something out of a Nazi propaganda brochure. In Spain, performers dressed up like Nazi soldiers or concentration camp inmates and included a parade float meant to look like the chimney of a gas chamber. In Belgium, performers dressed as Jewish men with the bodies of insects, or as men with exaggeratedly large noses holding bags of money. The mayor of that town had a simple (but mind-boggling) response: “this wasn’t anti-Semitic.”

Some might call these “extreme” examples. But they have the potential to do something that concerns me to my core: to make hating God’s Chosen People, once again, just a little more mainstream. A little more “stylish.” A little more “acceptable.”

Even in the United States Congress right now, we have leaders who explicitly support the Boycott, Divestment and Sanctions (BDS) movement. This is an effort by Palestinian and other anti-Israel activists to boycott products made by Israeli companies in an effort to hurt Israel’s economy. The BDS movement is founded on anti-Semitic ideals: that the Jewish nation of Israel has no right to sovereignty. And yet, at least two U.S. Congresswomen have publicly voiced support for this hateful campaign.

Yeshua (Jesus) promised His followers that “in the world you will have trouble” (John 16:33). Hatred for the Jewish people existed even before and during Jesus’ time on earth, and He knew it would continue. But I have to admit that the passion and strength of anti-Semitism in the world today often baffles me. At its core, it seems, well, arbitrary. Why would the world spend so much energy hating this one, relatively small, nation? The answer to that, I believe, is simple: it’s supernatural.

When God called Abraham, He declared that Israel would be His chosen nation. He chose to set the Jewish people apart to be a light to the rest of the world. He brought His law into the world through them, and then He saved the world through them by Yeshua’s death and rising again. It’s only logical, then, that Satan would nurse a special disdain for this holy people.

In the 12th chapter of Revelation, we read about a “dragon” who rages against all of mankind, but especially against the “woman who had given birth to the male child.” Read in context, it’s clear this “dragon” refers to Satan. The “male child” is Yeshua, the Messiah; and the woman? That’s God’s covenant people, Israel, through whom Yeshua came to the world.

As Israel flourishes today as a nation of technological innovation, economic strength, and respect for human rights, it stands to reason that Satan would be angry. And as more and more of God’s covenant people turn back to Messiah, it stands to reason that Satan would be enraged: he rightly interprets this as a sign of his impending doom. God’s chosen instrument of salvation – Yeshua – Jesus came first through the Jewish people. And when He returns, we will see the hearts of the Jewish people turn to their Messiah, proclaiming “Blessed is he who comes in the name of the Lord” (Matthew 23:39 NKJV).

When we’re faced with rising anti-Semitism, we have a few options. We could despair. We could hide in fear, waiting behind closed doors for some relief. We could get angry. We could respond in kind – with hatred for those who hate the Jewish people. I have compassion for those who want to respond this way. I confess that I have at times felt despair and anger. But Yeshua simply doesn’t give us the option of settling there. Paul tells Timothy that “God has not given us a spirit of fear” (2 Timothy 1:7 NKJV). And in his letter to the Romans, he writes “Do not be overcome by evil, but overcome evil with good” (Romans 12:21).

My friends, we have clear instructions and a clear hope. We must be clear about what we see: that anti Semitism is perhaps as real today as it was 75 years ago (and for thousands of years before that). We must be clear that it has its roots in the devil’s hatred against Messiah, who came so that we might all have life. And we must pray for our earthly leaders, participate as we are called in our earthly governments (through voting and civic duty), and we must boldly declare our support for the Jewish people and the nation of Israel.

Until Yeshua (Jesus) returns, anti-Semitism will persevere. Jewish people will be mocked in parades. We will find swastikas on memorials. But as God’s Chosen People have done since God first called Abraham, they too will persevere until He returns to make all things new. Take heart! 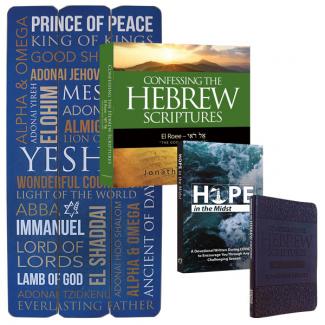 You’ll be encouraged every time you look at this Names of God plaque! It contains 23 different biblical references for God artistically arranged on a pallet-style background of three wooden boards. The names are presented in warm tones of tan and white on a soothing blue background. From King of Kin...

Taking Hope With Us Every Day 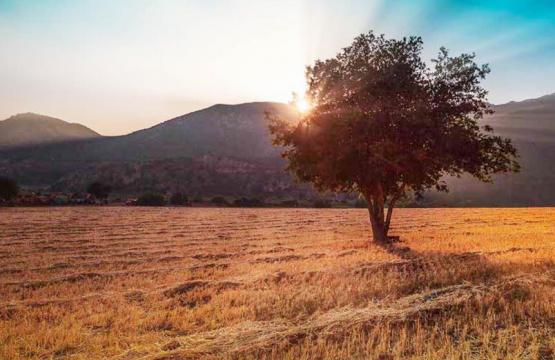 Taking Hope With Us Every Day 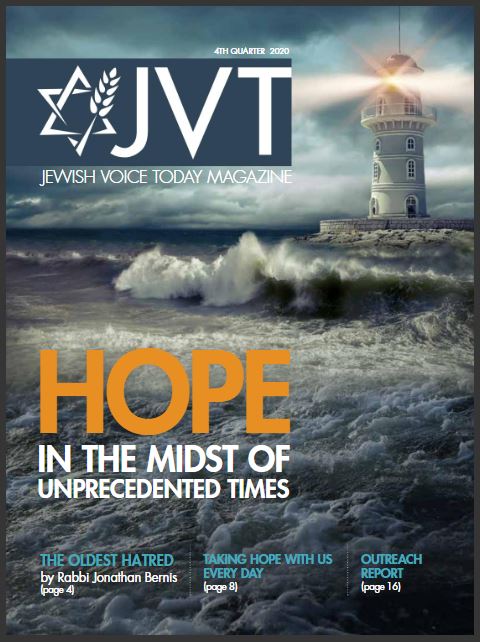 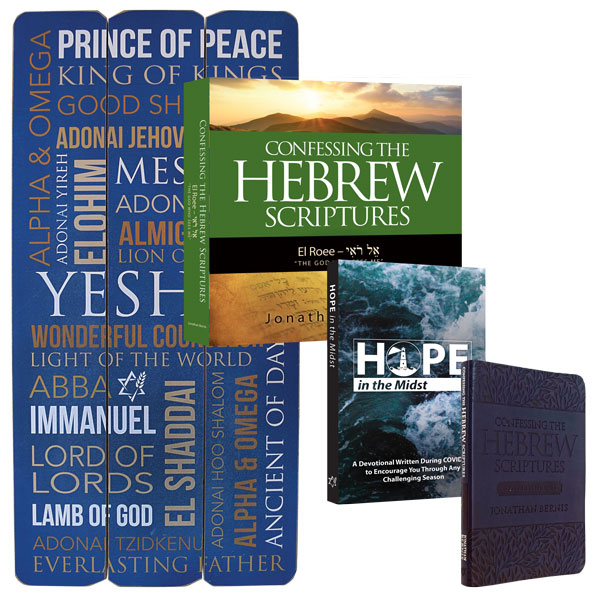