Why is Support for Israel Waning Among Younger Evangelicals? 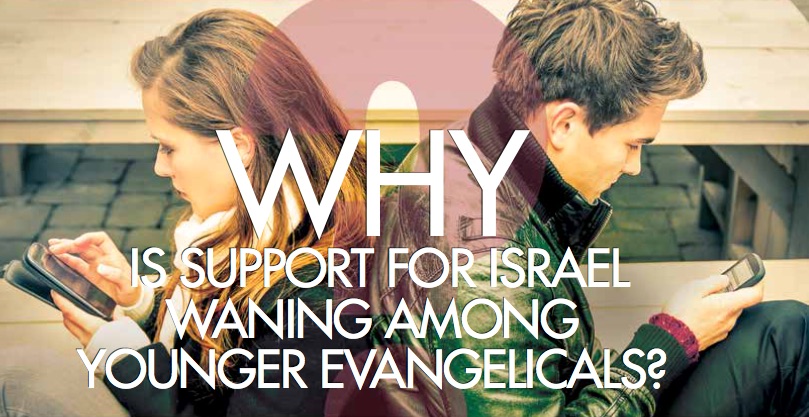 When I came to faith in Jesus as a 16-year- old, Jewish, heroin-shooting, LSD- using, hippie rock drummer, my dad was thrilled to see the change in my life, since I was immediately delivered from drugs.

He then introduced me to the local rabbi, who quickly befriended me and gave me a book to read documenting the history of anti-Semitism in the Church.

The quotes from the lips of Christian leaders were terrible and the accounts of anti-Semitic actions were shocking, but the Lord’s work in my life was so wonderful and the Word of God so real in my life that I really wasn’t fazed by what I read.

Plus, the church where I came to faith had a great love for Israel and recognized the Jews as the Chosen People. It was clear to them from the Scriptures, and it seemed as if the Spirit put this love for Israel into their hearts.

For the last 45 years, as I have traveled throughout the United States and around the world, I have encountered countless thousands of believers who share this same heart for Israel, some of them living in rural areas of India or Africa. Yet even there, in these remote locations, this same message of solidarity with the Jewish People touched their hearts in a deep and profound way.

Here in America, evangelical Christians have proven to be Israel’s best friends—their most solid and unwavering allies—to the point that even the Israeli Knesset recognizes them.

But things are changing with the younger generation of evangelical Christians.

Many of them do not share this same heart for Israel, and some are so solidly pro-Palestinian that they have become anti-Israel.

How do we explain this shift?

Here are some of the factors.

1. The older generation was much more aware of the miracle of Israel, as the modern nation was birthed out of the ashes of the Holocaust and supernaturally preserved by the Lord.

In its infancy, in 1948, Israel survived against all odds, and then the old city of Jerusalem was returned to Jewish hands through the amazing events of the Six-Day War in 1967.

There was no denying that the rebirth of Israel was a divine act.

The younger generation doesn’t see things this way. Israel has been here a long time now, and the Holocaust is even more distant. And Israel’s existence doesn’t seem that miraculous to many younger believers.

2. The younger generation of believers is less biblically literate.

Because of this, it is not as apparent to them that God’s Word promised Israel’s scattering and regathering, which is another reason that they will not recognize the miraculous hand of the Lord in the existence of the modern State of Israel.

3. The younger generation of evangelicals is more relational than theological.

This, of course, can be good or bad.

On the positive side, these evangelicals get to know Palestinians as well as Israelis, and that means they want to see equality and justice for all their friends. So, when they see Palestinians treated unfairly —especially when it is their own peers—they will naturally side with the perceived victims.

On the negative side, they can lose sight of what God is doing in the midst of human imperfection, causing them to lose sight of the larger divine purposes.

4. The younger generation is more focused on the micro-narrative, because of which they miss the macro-narrative.

To give an example from the broader culture, a young person might think like this: “Billy came out as gay, and he’s a really nice guy. But he gets picked on by the other boys, who call him a sissy (and worse). Well, Billy is going out with another boy named Bob. Why is it wrong for them to get married?”

In the same way, young people might see a wall in Bethlehem and say, “It’s not fair that the wall is there. It divides families and makes life very hard for the Palestinians living there.”

What they fail to realize is that the wall is there to keep Palestinian murderers out, and so they lose sight of the larger narrative because they focus on the smaller narrative.

5. The younger generation has been heavily influenced by years of biased media reporting and anti-Israel sentiments on university campuses.

The secular media often portrays Israel as the evil Goliath attacking poor little David (the Palestinians), while many campuses are marked by a growing, even virulent anti-Zionism (and even outright anti- Semitism).

Without outside help, they will have a hard time recognizing this slanted, biased reporting and lecturing—it’s often found on social media as well— and this also contributes to their lack of support for Israel.

6. The theology of preterism is rising in some circles teaching God judged Israel forever in 70 A.D. and that no national promises remain for the Jewish People as a nation.

While not widespread, this error is spreading with disastrous implications for the theology of these young people.

The good news is that there is a strong, pro- Israel prayer movement among young evangelicals, and that as younger Christians are visiting Israel for themselves, their hearts are changing.

Along with this, to the extent these young people see how Israel itself is threatened by radical Islam, they can have sympathy for Israel as well.

Most importantly, as the Lord turns their hearts back to His Word, their hearts will turn towards Israel as well.