In This World We Will Have Trouble
by Jonathan Bernis

International travel can be daunting. There are bags to pack, planes to catch, long waits in remote airports, and the nervewracking work of stepping into a culture that’s often so very different from our own.

Yet our JVMI staff and team of Outreach Partners take trips like these repeatedly throughout the year. We risk lost luggage, homesickness, physical discomfort, and even illness as we embark overseas to bring international quality medical care in the name of Yeshua to His Jewish people scattered across the globe, as well as their neighbors. Oftentimes we also risk facing local authorities who are suspicious of our work, or even outright hostile.

And in fact, we risk much more. We risk angering a powerful enemy. Satan “hates the light” (John 3:20). And Yeshua’s light is what our team is bringing to His people around the world.

“IN THE WORLD YOU WILL HAVE TROUBLE…”

During our Outreaches, teams of volunteers set up medical tents as well as a Counseling and Spiritual Care tent, which patients are invited to visit after they’ve been seen by our trained medical workers. In the Counseling and Spiritual Care tent, our team members pray for each person’s physical and spiritual needs. We often share the Good News with them, and we ask Yeshua (Jesus) to heal their wounds and to show them that He is their Messiah.

Last summer, a team from JVMI was offering free medical care to the Jewish people and their neighbors in the small Ethiopian community of Enfranz. We knew we’d face hostility there from Ethiopians who are members of the local Ethiopian Orthodox Church, which promotes prayer to Mary and other saints as well as other extra-biblical practices. They have a tradition in which they fast twice a week – usually Wednesdays and Fridays – out of zeal for their faith. The Muslim faith also has a stronghold in this region – sadly, Islam has grown to approximately 35 percent of the population in Ethiopia in the past decade.

And so several local Ethiopian officials were fasting during the time of our Outreach in Enfranz. And they were angry that we – a community of Believers in Yeshua the Messiah – had come to the area. In the middle of the week, one of our local team members heard an Ethiopian official speaking Amharic, the local language, on his cell phone. “We are going to find the spiritual activity here,” our team member heard him say, “and we are going to shut it down.” Our team prayed for protection.

That afternoon, a powerful rainstorm blew in unexpectedly. The winds violently collapsed our Spiritual Care tent. Some of our staff were injured, including one woman who suffered a painful shoulder injury and others who suffered head wounds. The tent itself was broken beyond repair.

The team was shaken. But they boldly set up a makeshift intercessory prayer tent back at their campsite, and they continued to pray for the people of Enfranz throughout the rest of the Outreach.

These frightening incidents often remind us of Satan’s hold on the world. Ever since that fateful day when Adam and Eve first believed the serpent’s lies and took a bite of the fruit in the garden, God gave him some of the authority over the Earth.

In the book of Luke, Yeshua heals a Jewish woman he says was “incapacitated by Satan for 18 years” (13:16). In the book of Acts, the disciple Peter describes Yeshua as a rabbi who “went about doing good and healing all who were oppressed by the devil” (10:38). It’s clear that physical illness, pain, hard-heartedness and even mental illness are often caused by Satan. In fact we know that many of the people we see on our Medical Outreaches are suffering from this very oppression.

This is spiritual warfare, and we don’t take it lightly.

It makes sense, then, that as JVMI seeks to heal physical wounds and bring peace and comfort to people on our Outreaches, Satan would be angered. We know that the rulers, powers, and worldly forces of darkness are working against us at every turn to disrupt the work we do (Ephesians 6:12). But the stakes are even higher than that. Because we don’t offer physical aid and then leave – we offer living water, too: the chance to know Yeshua as Messiah. There is nothing in this world that angers Satan more.

So while we pray for God’s protection, impactful medical care and worry-free interactions with local authorities, we know we will still face trouble.

THE ROOTS OF ANTI-SEMITISM

The spiritual warfare we encounter in our work at JVMI has its roots in an age-old struggle. Satan hates the Jewish people because they are His Chosen People. In the 12th Chapter of Revelation, we read about a “dragon” who rages against all of mankind, but especially against the “woman who had given birth to the male child.” Read in context, it’s clear this “dragon” refers to Satan. The “male child” is Yeshua, the Messiah; and the woman? That’s God’s covenant people, Israel, through whom Yeshua came to the world.

Yeshua’s atoning death on the tree and His victory over death three days later secured a definitive defeat over Satan, and he knows that. Yet evil remains in the world for now. That tells us that Genesis 3:15 – where God tells us that we will ultimately “crush Satan’s head” – hasn’t yet been fulfilled in its entirety. Yeshua tells us that will happen when He returns and the final enemy, death, is defeated (see 1 Corinthians 15:24-26).

I want you to consider, for a moment, what it’s like when a storm blows in. Just like the rainstorm that brought down our Counseling and Spiritual Care tent in Enfranz, powerful weather is often preceded by small signs that hint at what’s to come. The sky may darken, the temperature drops. Wind picks up. Even animals will sometimes scatter to safety. These signs often clue us in about the thunder, lightning, rain and wind that is to follow.

In the same way, as more and more of God’s covenant people turn back to Messiah, the devil rightly interprets this as a sign of his impending doom. Jesus came first through the Jewish people. And He will return when the Jewish people cry out “Blessed is He who comes in the name of the Lord” (Matthew 23:39). As promised in Romans 11:26, “all Israel will be saved.” This is a harbinger of Satan’s ultimate defeat – so it’s no wonder he zealously despises Jewish people.

And it’s no wonder he despises our work – we are, after all, openly and boldly proclaiming the Good News of Yeshua directly to the Jewish people and many are being saved!

ANTI-SEMITISM ON OUR OUTREACHES

So we are not surprised when we encounter deepseated hatred for Jewish people (and us) during many of our Outreaches, including in Ethiopia. Many rural Ethiopians have little knowledge of European anti-Semitism or even of the Holocaust, and yet they believe many of the same hateful superstitions about the Jews. Many actually believe that Jewish people turn into hyenas at night, or cast spells to make others sick, or even that they eat Christian children!

While we are committed to treating anyone and everyone, not just Jewish people, at our Medical Clinics, we make it clear when we visit that we are there because there are Jewish people in the area.

We do that for two reasons: first, to demonstrate to the local communities that something good has happened because the Jewish people are in their midst. And secondly, we do it because we want to demonstrate the love Yeshua has for His covenant people. We want them to know that He loves them and desperately desires that they would know their Messiah.

HOW WE DO BATTLE

We aren’t surprised by the troubles we find abroad, and we aren’t unprepared either. We spend weeks and even months before our Outreaches praying with each other (and with you!) back home. And we are strategic in our preparations and our prayers.

For example, remember the Orthodox Ethiopians who fast every Wednesday and Friday in worship to idols? Our teams have now committed to fasting each Wednesday during our Outreaches there as well. And we know that the name that we call upon – the name of Yeshua – is above every other name; and that we can conquer the powers of evil by “the blood of the Lamb and by the Word of their testimony” (Revelation 12:11)!

The spiritual warfare we face is increasing, but so are the victories. The Lord has responded to our prayers and fasting, and earlier this year, we broke all of our previous records and treated more than 17,000 people in one Outreach alone! (That was in Ambo Meda, Ethiopia.)

In other words, we are seeing fruit. Yeshua is coming back soon, and we are preparing our own hearts and those of His people. So, please, continue to pray, and take heart. For Yeshua declared in John 16:33, “In this world you will have trouble, but take heart! I have overcome the world!” 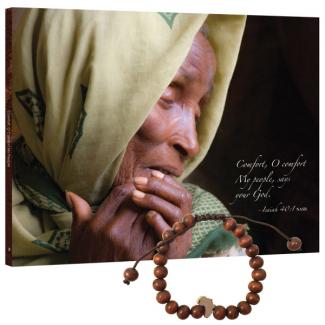 Africa Bracelet Package (2153) Comfort, O Comfort My People, photo book Meet the Beta Israel of Ethiopia. This beautiful coffee table book of photographs and stories chronicles Jewish Voice’s outreach to this lovely but impoverished people. See how your support has uplifted and helped the po... 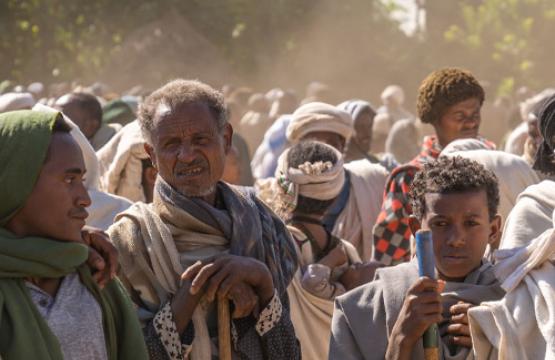 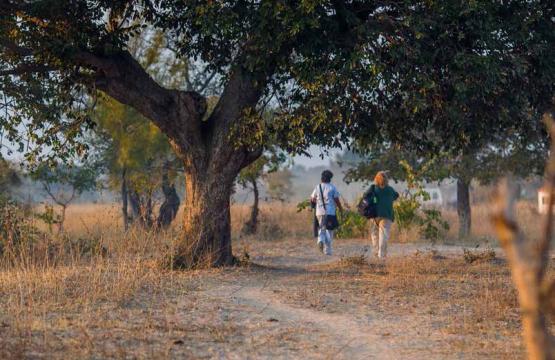 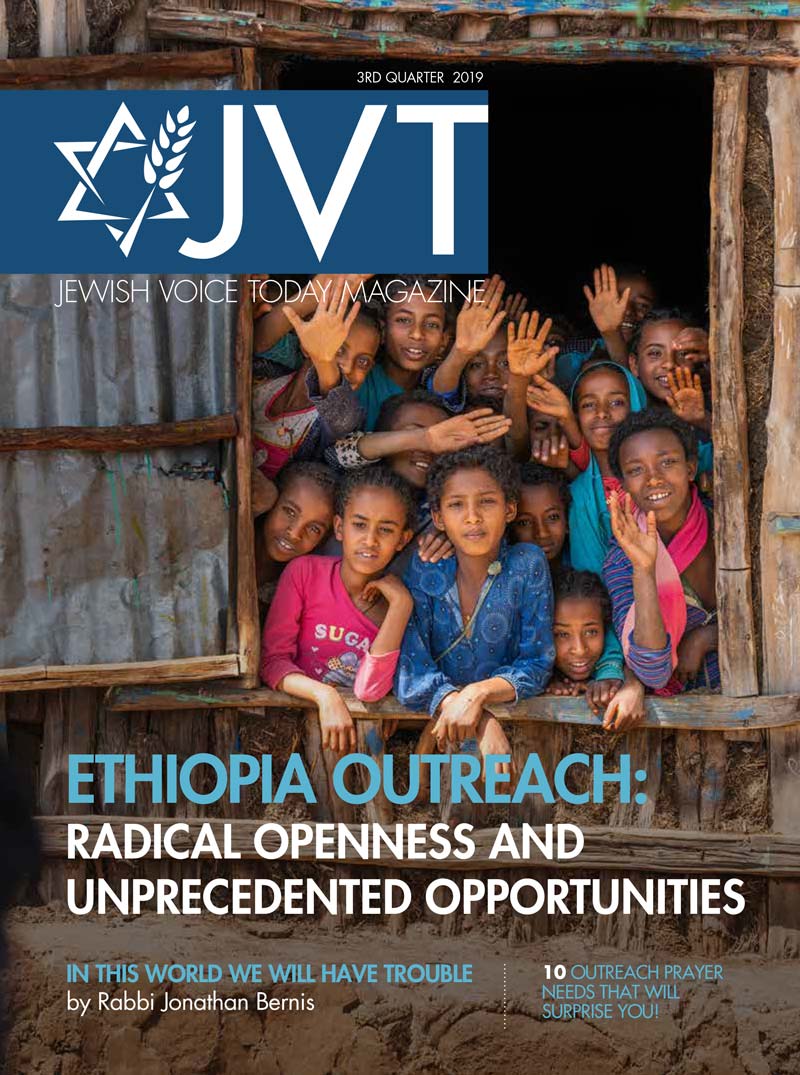 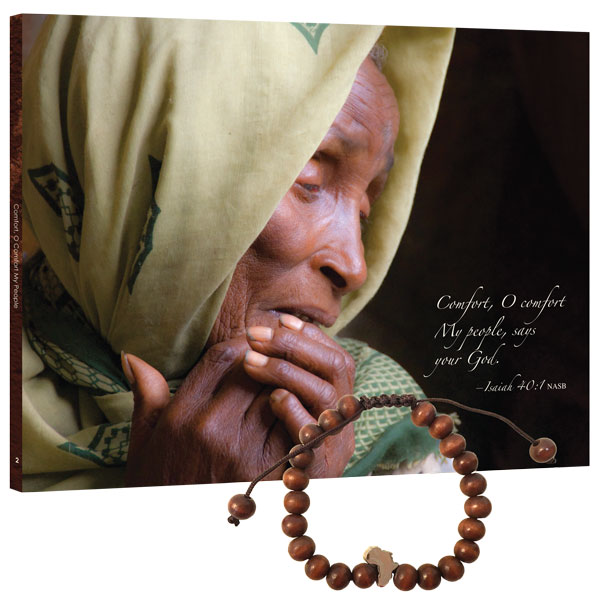