The Anticipation of Shavuot 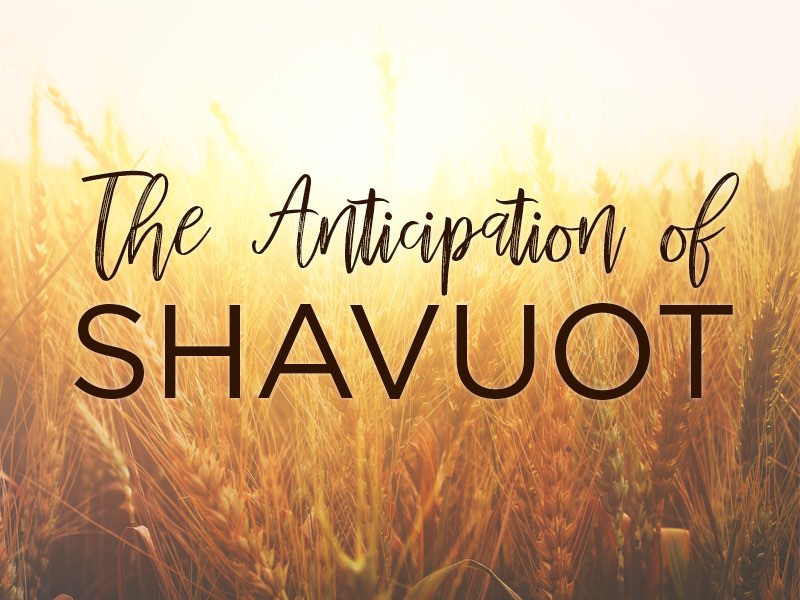 Shavuot marks the end of a season of anticipation. It is a harvest festival and one of three pilgrimage feasts of the Jewish year. For such holidays, each physically able, adult Jewish male was to travel to Jerusalem to present his offering. In the case of Shavuot, he offered the first of his barley harvest.

Jewish tradition teaches that God gave the Torah (the Law) to His people at Mount Sinai on the date of Shavuot. The Israelites had been freed from 400 years of slavery as a people. They traveled through the Middle Eastern desert on their way to a Land they’d never seen with a God they were getting to know in a whole new way. Their time in the wilderness must have been filled with anticipation. What would the coming days bring?

Then, God called them to gather at the base of Mount Sinai, and He showed Himself in thunder, lightning and smoke. When Moses came down from meeting with Him, he brought God’s Torah, or instruction. Through it, God revealed Himself to the Israelites and set them apart as His own people. It was a day that changed their relationship with Him.

The Hebrew word “Shavuot” means “weeks,” and so, the holiday is also called The Feast of Weeks. In Leviticus 23, God told the Israelites that when they settled into the Promised Land and had produced crops, they were to begin observing the Feast of Shavuot. Its date was figured by counting seven Sabbaths plus one day – or 50 days – from the day after the Shabbat that follows Passover (Leviticus 23:15–16). Once observance began in Israel’s history, each year, as the counted days passed, God’s people anticipated both the new harvest and their journey to the holy city to present their offerings.

Today, Shavuot is a time of celebrating the gift of the Torah. Many Jewish people stay up all night reading it with family and friends. When Shavuot morning dawns, they pray together and read the Ten Commandments.

In the biblical Feasts, God placed pictures of future events related to His plan to redeem the world.  After His resurrection and before His ascension to Heaven, Jesus told His disciples to wait in Jerusalem for the empowering that would come to them when God gave the Helper Jesus had mentioned. Day by day, they counted and waited, not knowing exactly what was next. Then, God imparted the Holy Spirit to them. On that miraculous day, they spoke in languages they didn’t know, and 3,000 people were saved.

What the Christian church knows as Pentecost (“pente” meaning 50), happened on Shavuot – 50 days after Jesus was raised from the dead. It was the fulfillment of God’s promise through the prophet Jeremiah to write His Law on our hearts (Jeremiah 31:32) and, through Ezekiel, to put His Spirit within us (Ezekiel 36:27).

When God first gave His Torah, He wrote it on tablets of stone. On Shavuot in the first century, He wrote it on our hearts by giving His Spirit to live inside those who believe in Jesus. And it changed our relationship with Him. He no longer resides in pillars of fire and cloud or dwells in a physical Temple. He has made His home in our hearts – He is always with us, never to leave us.

As Believers, Shavuot offers us the opportunity to celebrate both God’s Word and His Spirit. Through both gifts, we can know our God. His Word reveals who He is, and His Spirit guides us into all truth (Hebrews 1:1–2, John 16:13). And there remains much to anticipate in our daily relationship with God as we engage with Him through these two tremendous gifts.