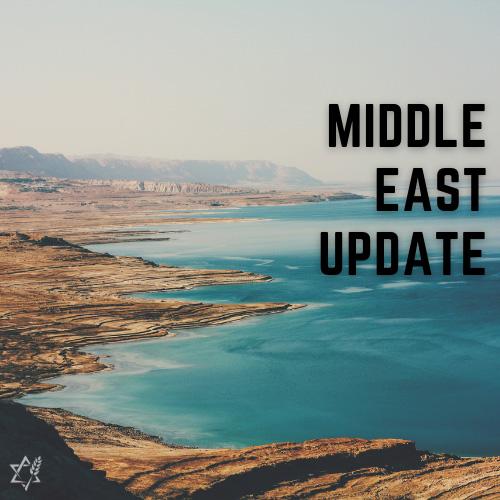 As a partner of Jewish Voice who loves the Gospel and the Jewish people, I’m sure you’ve been watching the news about the continuing situation in Ukraine and the current violence that’s been happening in Israel.

Just a few days ago, my team and I walked across the Polish border into Ukraine to meet with our partners on the ground. As we walked, the reality of everything we’ve been watching on the news came crashing over us. “This is real,” we thought. My heart aches over what is happening. I think of Ukrainians who are forced to flee their homes – and the lives being ended because of hatred, violence and acts of terror.

But in the midst of it all, God has called all of us to pray.

That’s why I encourage you to not feel overwhelmed by the darkness or the enemy today. Don’t give in to dismay. Obey God. Obey His command. Reach out to Him now – on behalf of Ukraine, Israel and the Jewish people. But also, with whatever challenge or heartbreak you might be facing right now. God will give you peace.

Thank you again for praying with us and for us in this work of ministry.

The Jerusalem Post reports that at least six people were wounded - some in serious condition - in what appeared to be a terrorist shooting attack in the center of Tel Aviv today. The attack took place in multiple locations on Dizengoff Street, a popular scene filled with restaurants and bars in the main Israeli city.

At the time of writing, one of the wounded was said to be in critical condition. At least two shooters are reportedly still on the run.

The suspected attack was the latest in a series of deadly attacks that began last month in Beersheba, Hadera and Bnei Brak. So far, 11 Israelis have been killed in the attacks.

Security forces have been on high alert in recent weeks amid the wave of terror attacks and concerns of further attacks during the month of Ramadan and the upcoming Passover holiday.

The Times of Israel released more information about the victims of those who were killed in last week’s Bnei Brak terror attack – when a Palestinian terrorist opened fire in a killing spree.

Of the 5 who were killed, 3 have been identified by Israeli officials:

Yaakov Shalom, a resident of Bnei Brak who, according to The Times of Israel, was driving home when he was stopped by the gunman, who opened fire on his vehicle from a close range. Shalom, the son of a prominent Rabbi who passed of COVID-19 last year, is survived by his mother, wife and four children.

Avishai Yehezkel, a resident of Bnei Brak was shot while trying to protect his 2-year-old son. He is survived by his wife, who is eight months pregnant, and his son.

The remaining 2 victims remain unidentified. But, according to The Times of Israel, they were workers from Ukraine.

On Thursday, Israel joined 92 other countries in the U.S.-led push to vote Russia off the United Nations Human Rights Council. Twenty-four countries voted no and 58 countries abstained.

The only other country to be removed from the Human Rights Council was Libya in 2011.

According to the Jerusalem Post, the United States announced it would seek Russia's suspension after Ukraine accused Russian troops of killing hundreds of civilians in the town of Bucha.

US Ambassador to the United Nations Linda Thomas-Greenfield told Reuters: "It is important to say (to Russia) 'we're not going to allow you to continue to act with such impunity and pretend that you respect human rights."

Russia has warned countries that a yes vote or abstention will be viewed as an "unfriendly gesture" with consequences for bilateral ties, according to a note seen by Reuters.

Israeli Foreign Minister Yair Lapid was also quick to note, "the vote today does not change our position on the UN Human Rights Council, which is an extremist, morally flawed, biased and essentially anti-Israel body that has been exploited since its inception by the main countries violating human rights in the world as a political tool, including to attack Israel."