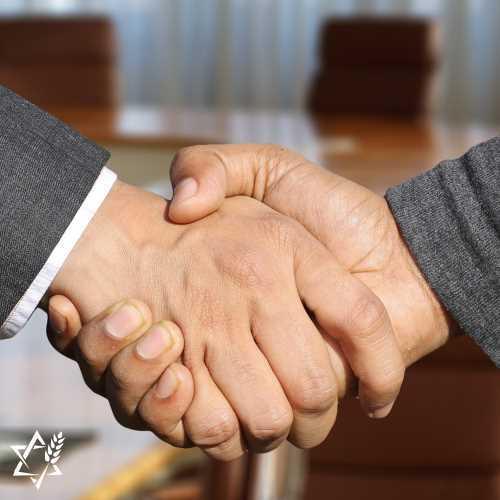 “From the LORD comes deliverance.

May Your blessing be on Your people.”

I’m holding on to this truth from the Scriptures as we continue to pray and respond to the crisis in Ukraine – that God will bring deliverance.

And I pray it over you as well, in whatever you’re facing today, that you’ll experience the power and presence of the Lord as the Deliverer of His people.

There’s no greater promise we have from God – which was ultimately realized in the coming of His Son, Yeshua (Jesus), the Messiah.

Please join me and all of us here at Jewish Voice Ministries International in praying for God’s will to be done in Israel – and around the world. And for His grace, protection, and blessing to be upon His people...and those who support them.

The Times of Israel reported late last week that Israel’s Prime Minister, Naftali Bennett, has played a central role in advancing negotiations between Ukraine and Russia.

According to The Times of Israel, Kyiv and Moscow have made significant progress toward agreeing on the tentative deal, which would also have Ukraine put limits on its military and remain neutral by not making alliances or hosting foreign forces on its soil. Negotiators from the two sides discussed the full deal for the first time early last week.

But despite the apparent progress in the talks, The Times of Israel reports that Ukrainian negotiators suspect Russia may be buying time to regroup its military during the talks. “They lie about everything,” a Ukrainian source is reported as saying.

Israel is one of the few countries that maintains good working ties with both Ukraine and Russia. Israel’s attempt to take the middle ground has caused friction on all sides for Jerusalem as Ukraine and the U.S. have pushed Israel for more support.

Prime Minister Bennett has defended his decision to not send arms or other military aid to Ukraine as necessary to maintain his status as a neutral broker.

Israel is wary of angering Russia due to the Kremlin’s presence in Syria, where Israel carries out security operations against Iran-linked forces, in coordination with Russia.

The Times of Israel indicates that Israeli officials have been careful not to exaggerate Bennett’s role in negotiations and have said he is not actively making proposals or pressuring the sides. Instead, they describe him as a channel of communication, passing messages from the sides in what they have described as a frank and realistic manner.

According to The Times of Israel, the U.S. is reportedly weighing a move to delist Iran’s Islamic Revolutionary Guard Corps (IRGC) as a terror organization, as it moves closer to reviving the nuclear agreement with Tehran.

Tehran, in return, would commit to de-escalation in the region.

The IRGC, a hardline militia with close ties to Iran’s supreme leader, was designated a Foreign Terrorist Organization after it withdrew from the 2015 nuclear agreement officially known as the Joint Comprehensive Plan of Action (JCPOA).

The Times of Israel reports that the move is seen as a key final ask from Iran before it agrees to return to compliance with JCPOA.

While no decision has been made, The Times of Israel indicates that Israel is reportedly opposed to the idea, particularly because the pledge from the IRGC to reign in its activities is not slated to include an explicit reference to actions against U.S. allies in the region such as Israel.

When rumblings of a possible IRGC delisting made headlines last month, Israel’s Prime Minister, Naftali Bennett, made his sentiments known immediately saying, “They are now asking to let the biggest terror organization on earth off the hook.”

The Jerusalem Post reported that leaders of Hamas and Palestinian Islamic Jihad (PIJ) called for escalating the fight against Israel, especially in the West Bank and Jerusalem, until “the liberation of Palestine.”

The call for stepping up “resistance operations” against Israel comes amid mounting tensions between the Palestinians and Israel in the West Bank and Jerusalem.

According to The Jerusalem Post, the Palestinian Authority, Hamas and PIJ have warned that Jews are planning to “storm” al-Aqsa Mosque compound (Temple Mount) during the upcoming Jewish holidays.

They called on Muslim worshipers to converge on the mosque in the coming days to “thwart” the planned “incursions,” warning that Israeli measures could lead to a religious war in the region – recalling last year’s war between Israel and Hamas.