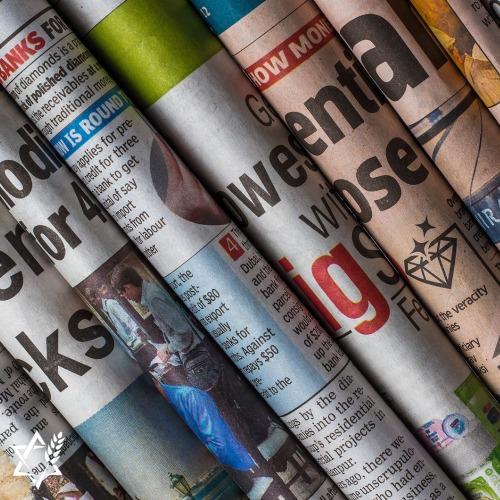 While the global situation feels overwhelming – as we continue to hear breaking news about the situation in Ukraine – it would be easy to give in to the darkness.

But let me encourage you: no matter what you’re facing, no matter what you may feel inside, “be strong” and “take heart.” And the only way to do these things . . . is to place all your desires, circumstances and hopes in God’s hands.

The power of His presence, the certainty of His promises and the hope of His victory is all we need to endure and overcome the challenges we face.

As you pray this week, I’d also like to invite you to continue praying with me and everyone at Jewish Voice on behalf of God’s people – that God would open the eyes of His Chosen People to see the hope made available to them through Yeshua (Jesus), the Messiah.

The Washington Post reported earlier this week that Israel is going public with its support for Ukraine to a greater scale while keeping a wary eye on Russia, the primary backer of the Syrian regime – which is classified by Israel as an enemy state on its northern border.

Avoiding a direct condemnation of Russia, Israeli Prime Minister Naftali Bennett said, “We are praying for the well-being of the citizens of Ukraine and hope that additional bloodshed will be avoided. We are conducting a measured and responsible policy.”

According to The Washington Post, the Prime Minister also said that Israel will immediately send 100 tons of water purification kits, medical drugs, tents, blankets and other humanitarian equipment for civilians in the combat zones in Ukraine and to Ukrainians attempting to flee.

On the ground, as The Washington Post reports, Israel stands with Ukraine. Israeli medics are offering services to refugees across the Ukrainian border, Israeli phone companies are providing free credits to Ukrainian citizens to get in touch with family members, and Israeli tech companies are assisting with evacuating Ukrainian employees.

Russia is the main supporter of President Bashar al-Assad of Syria – a country to Israel’s north that maintains a large military presence in the country. With Iranian funding and support, Syria has become a weapons way station for Hezbollah, the Iranian-backed military movement in Lebanon, with an estimated arsenal of 100,000 missiles and rockets.

“President Putin noted that he is ready for negotiations. Prime Minister Bennett said that Israel is ready to assist as much as required and at any time in order to help resolve the crisis and bring the parties closer. This is due to Israel’s special status and good relations with all parties.”

According to a senior Israeli official, the United States and Ukraine were briefed by Israel before and after Bennett’s meeting with Putin.

The Jerusalem Post reported earlier this week that French President Emmanuel Macron came out against the recent description of Israel as an apartheid state by human rights groups like Amnesty International.

Speaking for the President at the recent annual dinner of the Representative Council of Jewish Institutions in France (CRIF), Prime Minister Jean Castex said:

“Erasing Jerusalem's Jewishness is unacceptable, just as it is unacceptable that in the name of a just fight for freedom, associations misuse historically shameful terms to describe the State of Israel, where all citizens, whatever their religion, have understood that their only hope is peace together. It is not by affirming such untruths that associations that claim to pursue an objective of peace can claim to fulfill their vocation. How dare we talk about apartheid in a state where Arab citizens are represented in government, in parliament, in leadership positions and in positions of responsibility? As I promised you, the definition of antisemitism of the International Holocaust Remembrance Alliance has been adopted by the Republic.”

COVID RULES IN ISRAEL ROLLED BACK

The Times of Israel reported this week that Israel’s two-year-long pandemic-induced national state of emergency ended on Tuesday, with cases plummeting and hospital wards emptying out.

A top expert, according to The Times of Israel, says that “there is no cloud on the horizon, for now.”

After so many people got infected by Omicron, experts expect that widespread immunity will reinforce vaccine immunity to protect Israel from a large outbreak in the near future, even with new variants.

According to The Times of Israel, most COVID regulations have been repealed as the country transitions from a “state of emergency” to a “special health situation.”

The most notable of these are travel restrictions.

Under the new guidelines, both vaccinated and unvaccinated tourists of all ages will be allowed into the country as long as they submit a negative PCR test before boarding their flight and take another one after landing in Israel. Citizens will no longer need to test before returning home (though it’s suspected that some airlines will still insist on a test); however, they will need to test upon return.

Presenting a green pass, which proves that its holder is vaccinated or has recovered from the virus, has become a prerequisite for far fewer venues in recent weeks and now won’t be requested at all. And while masks will still be required indoors, the current requirement for masks in some large outdoor gatherings will be canceled.