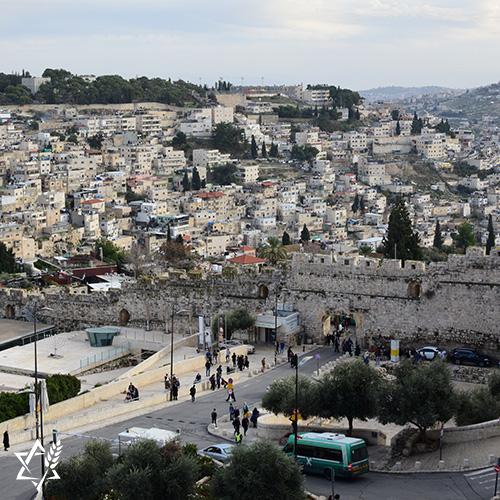 Even in your own walk of faith, I encourage you not to feel overwhelmed by the darkness or the enemy today. Don’t give in to dismay. Turn to God. Trust His Word.

Reach out to Him now — on behalf of Israel and the Jewish people. But also with whatever challenge or heartbreak you might be facing right now. And God will give you peace.

The Jerusalem Post reports that at least one person was killed and 19 wounded in two explosions in bus stops at separate entrances to Jerusalem last week, in what police are treating as a coordinated double terror attack.

Both explosions, one at the entrance to the city near the Central Bus Station and the other in the Ramot neighborhood, occurred at bus stops during rush hour.

The bombs were detonated remotely and were reportedly packed with nails and bolts to maximum casualties. One bus near the scene of the first attack was riddled with holes, showing the dispersion of shrapnel.

Following an initial investigation at both scenes, Israeli police are treating the two explosions as a coordinated joint attack and made efforts to uncover additional explosive devices across the city.

Though no group has taken responsibility for the attack, Hamas praised it with its spokesperson, Abd al-Latif al-Qanua, saying that it was “in response to the occupation and its settlers' crimes against our people and Al-Aqsa Mosque.”

New York City’s Jewish community is heaving a sigh of relief after the U.S. Federal Bureau of Investigations (FBI) and New York Police Department (NYPD) announced they had stopped “a developing threat to the Jewish community.” But some, while grateful to law enforcement, are worried other threats could be lurking around the corner. Two suspects were arrested at Pennsylvania Station in Manhattan. NYPD officers seized weapons, including an illegal firearm and a large hunting knife; ammunition and a Nazi armband apparently belonging to the suspects, according to reports.

UN Ambassador Gilad Erdan launched an exhibit at the Manhattan UN headquarters on Tuesday that will be on display for one week. According to a quote from Erdan in The Jerusalem Post, he launched the exhibition “to fight in every way the false narrative that the Palestinians spread at the UN.” The exhibit includes documents illustrating the lives and history of Jewish people in Arab countries as well as Iran. According to The Jerusalem Post, a UN Partition Plan, in which a Jewish and an Arab state were voted upon on November 29, 1947, led to Israel's war of independence half a year later on May 15, 1948.