“For I know the plans I have for you,” declares the LORD, “plans to prosper you and not to harm you, plans to give you hope and a future”

As I am writing this, Israel should finally have a new government – putting an end to 16 months of political turmoil wrought by three inconclusive elections.

You can read more about this significant event in the news articles below, but let’s just say for we who care so deeply about Israel and her people, this is an answer to many prayers.

It is cause for thanksgiving – and I believe the COVID-19 pandemic played a key role. Without the challenges and tragedies brought by the virus, would Benjamin Netanyahu and Benny Gantz have become allies to form this new emergency government? Only God knows, but it doesn’t seem likely.

So again we see how God can bring good from the difficulties we face. Again, we have reason to give Him thanks.

Let’s continue to lift up Israel and the Jewish people in prayer, trusting and believing that our God is working in the hearts and minds of many, that He is drawing people to Himself. And let’s rejoice together that our God knows the plans He has for us!

NETANYAHU GETS MANDATE FROM ISRAELI PRESIDENT TO FORM NEW GOVERNMENT

Last week Prime Minister Benjamin Netanyahu was officially granted a two-week mandate by President Reuven Rivlin to form his fifth straight government. This would keep him in power until November 13, 2021.

“I hope Israel will soon have a government that will deal successfully with the complex challenges that stand before us,” Rivlin said, referencing the dual crises of the political stalemate and the impact of the COVID-19 pandemic.

The law that passed would enable Netanyahu to continue as prime minister for a year and a half and then Blue and White Leader Benny Gantz would take over the position. Both will have veto power over legislation. 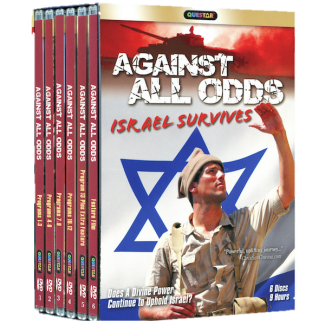 When you give a gift of $65 or more to provide support for Messianic ministries in Israel and critical resources to Jewish people around the world, we’d like to bless you by sending our “Against All Odds – Israel Survives: The Complete First Season” six-DVD set. In 13 episodes you’ll meet people who have lived through what can only be described as miracles of biblical proportions and hear their remarkable stories. Request your DVD set today!

“The unity government that will be established despite all the difficulties is necessary to heal Israeli society,” Gantz wrote in his weekly message on Facebook, according to The Jerusalem Post. “We need an emergency government to help the million unemployed people and to deal with the medical danger that still hovers and could return.”

Gantz continued, saying the government will not be the one of his dreams or of Netanyahu’s dreams, but “at the end of the day, the people wanted and needed unity. The time has come to put everything aside and focus on the good of the State of Israel.”

Netanyahu has led the transitional government during what is widely seen as the worst political crisis in Israel’s history, and all while being under criminal indictment and repeated predictions of his political downfall.

Last Thursday, he was endorsed as prime minister by 72 members of Israel’s parliament. If Netanyahu had not received at least 61 recommendations, the country would have been forced to go to a fourth election in less than 18 months.

In a letter to President Rivlin, Netanyahu agreed to be tasked with forming the “emergency national unity government.”

This government could provide a rare period of political stability as it works to lead the country into economic recovery from the damage caused by the COVID-19 pandemic and lock-down.

Under this coalition deal, the government was to be defined as an “emergency” body for its first six months, focused exclusively on combating the virus. To address questions about the legality of this, the parties said the clause would be amended to say COVID-19 will be the priority, but other issues can also be handled, according to The Times of Israel.

The new government was expected to be sworn in on May 14.

Join me in thanking God that He is in control of our future and is our source of hope. Please pray with me for: