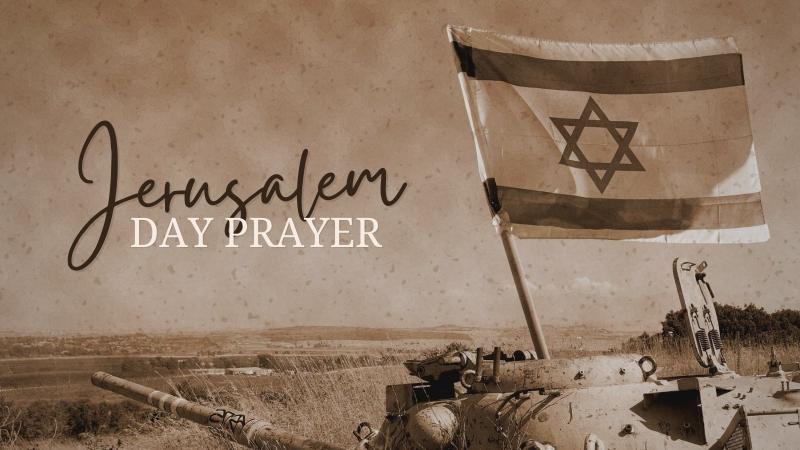 Jerusalem Day marks the anniversary of a united Jerusalem coming back into Israeli hands at the end of the Six Day War in June 1967. It is a fitting day to follow Scripture’s instruction and pray for the peace of Jerusalem and lift up prayers for Israel. But first, you may want to know a little background about Jerusalem Day.

How Jerusalem Day came to be

Before the Six Day War, Jerusalem was divided between Israel and Jordan.  In 1966, Egypt and Syria formed a defense pact against Israel, and as a result, Israel’s enemies were emboldened to conduct 63 attacks in the first four months of 1967. From the elevated position of the Golan Heights, Syria often attacked Israeli farmers and kibbutzim (Israeli settlements) in the valley below.

Russia then riled Egypt with lies that Israel was preparing to attack and wipe out Damascus, the Syrian capital. So, Egypt, being Syria’s ally and hating Israel themselves, amassed troops at Israel’s borders. Other Arab nations joined the intimidation by staging hundreds of thousands of soldiers at Israel’s borders. Jordan, who ruled half of Jerusalem, signed a mutual defense pact with Egypt.

Though Israel sent messages of peace, the surrounding Arab nations would not stand down. Inflammatory rhetoric flew over Arab radio waves as tensions and skirmishes escalated. Israel’s Arab neighbors vastly outnumbered her in terms of troops and weaponry. It wouldn’t be an evenly matched fight if the still-young nation-state let them get the upper hand. Fearing the loss of thousands of Israeli lives, Israel pre-emptively struck and disabled much of the Egyptian Air Force. War was official.

Israel pled with Jordan to stay out of it, but Jordan attacked Israeli Jerusalem instead, hoping to gain complete control of the ancient city. After six days of fierce fighting, the opposite proved true. Israel gained control over all of Jerusalem as well as the critical Golan Heights. After more than 2,000 years, Israel’s capital was once again intact and in her hands.

When you hear news reports referencing the demand for “pre-1967 borders” for Israel, this is what it means. Israel would be expected to relinquish half of her capital and holiest city, Jerusalem. She would also have to turn over the Golan Heights, leaving Israeli lives in the valley below in danger of the same kind of Arab attacks that were so frequent before the Six Day War.

Prayer for Israel on Jerusalem Day

Jerusalem Day is a day of celebration and a beautiful time for focused prayer for Israel. Yom Yerushalayim, as it’s called in Hebrew, begins this year at sunset on May 9 and ends the evening of May 10. Join us in this biblical prayer for Israel, based on the Scriptures:

Lord, You have engraved Jerusalem on the palms of Your hands. You love her, and her city walls are ever before you. (Isaiah 49:16). Jesus wept over her reluctance to recognize Him as the Messiah they had waited for (Luke 13:34). Israel is precious in Your sight (Isaiah 43:4a).

I pray for Jerusalem, for all Israel and her citizens, to be at peace – with one another and their Arab neighbors (Psalm 122:6). May peace be within and at all her borders (Psalm 122:7). May there be shalom in the houses of government (Psalm 122:7).

For Your sake, O Lord, I will seek the good of Jerusalem, of Israel (Psalm 122:9). For the sake of my brothers and friends there, I ask, Lord, that You fill her streets and businesses and neighborhoods with Your shalom (Psalm 122:8).

Lord, I know that Your perfect peace only comes through believing in Your Sent One, Yeshua the Messiah (John 14:27). Blessing Israel in earthly ways doesn’t compare to eternal peace with You, for which we need to trust in the name of Jesus (Acts 4:12). So, I pray that You would open the eyes and hearts of Jewish people (Romans 11:25) – whether in Israel or abroad – to see that Yeshua is the One whom the prophets foretold (Isaiah 53, Luke 23:26-27). Lord, save all Israel (Romans 11:26), and may You be glorified through your people, Israel (Isaiah 49:3).