Join us as we stand in prayer 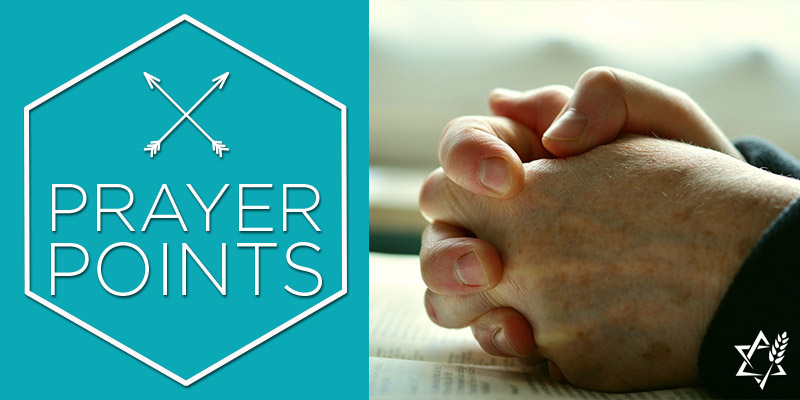 It’s almost Purim, which celebrates the Jewish people’s rescue from the evil plot of Haman, an anti-Christ figure. Key to this biblical account is Esther, a young Jewish woman who became queen of Persia. In a time of crisis, her relative Mordecai persuaded Esther to stand before the King on behalf of her people. Can you quote Mordecai’s famous exhortation to her? He told her, “For if you remain silent at this time, relief and deliverance for the Jews will arise from another place, but you and your father’s family will perish. And who knows but that you have come to your royal position for such a time as this?” (Esther 4:14).

Are we hearing God’s call to us – to stand in prayer for such a time as this? In this current season, it seems certain that world events are colliding with prophetic timelines in ways that take our breath away and send us to our knees. Anti-Semitism is again on the rise, and Jewish people not only need protection in that regard but they also urgently need the good news of salvation through Yeshua (Jesus). Like Esther, we are being called to take our place on their behalf in just such times as these.

What can we take from the book of Esther as inspiration for prayer points? Here are a few.

By the way, as you read this, our Medical Outreach to Ethiopia will be almost complete. Outreaches like this are one of the ways we are putting our faith into action to reach out and see Jewish people accept Jesus – for such a time as this. Please step into your authority as those who stand before the King of Kings, and pray rear guard prayers for this Outreach with us.

Lord, we ask for Your protection over all the Outreach participants traveling home, for the Ethiopian community and brand new Believers. Please help congregational leaders from outside the area as they do follow-up work to see a new congregation established in the region. And Lord, please pour out fresh courage and passion upon all of us to see Jewish people around the world come to know You in greater numbers than ever before. May we take our stand together in action and prayer on their behalf – for such a time as this. In Jesus’ name, AMEN.