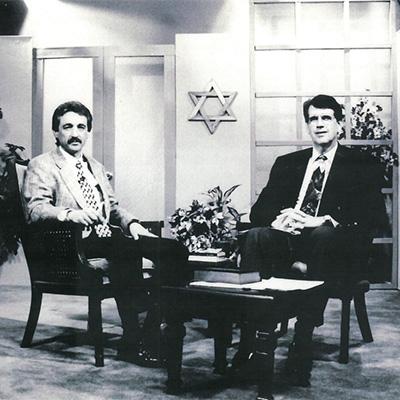 When Louis Kaplan first heard from the Lord in December 1966 that he was to begin a radio ministry to Jewish people, he also received a confirmation of God’s leading—a revelation that an important prophetic event would soon take place. As he sought support for a radio ministry, he approached several Christian businessmen in Phoenix and shared with them about the prophetic confirmation. He received what he called “the polite brush-off.” Through God’s grace and the faithful support of one unknown elderly lady, God enabled Louis to start a daily 15-minute broadcast in Phoenix, Arizona in January of 1967.

The formation of Jewish Voice Broadcasts (JVB) came when the Jesus Movement was in its early stages. This was a period of great revival, particularly among young people, in the United States from the late 1960s and into the 1980s. Record numbers of people, many of them Jewish, were coming to faith in Yeshua (Jesus). Interest in what was previously unimagined—a “Christian Jew”—was growing.

Six months after JVB began, the prophetic event God had conveyed to Louis Kaplan occurred. When Jerusalem was attacked by neighboring enemies, Israel fought for six days and emerged having reunited Jerusalem under Israel’s control for the first time in nearly 2,000 years. The astounding re-establishment of the Holy City with the Six-Day War sparked significant interest in the fledgling radio ministry. From the one station broadcasting to Phoenix alone, Jewish Voice Broadcasts (JVB) spread to 22 stations in 1968, and then to every major city in the United States with a substantial Jewish population.

By 1972, the now 57-year-old Louis and a small JVB staff were sending radio tapes to 43 stations across the country. The 15-minute radio spot shared messages on Israel and Bible prophecy along with testimonies of Jewish people from all walks of life, including businessmen, lawyers, doctors, artists, housewives, college students, and former drug addicts.

As interest in sharing the Gospel with Jewish people grew, the ministry led four witnessing teams to Israel. From 1973 through 1984, there were two tours per year, on average — winter and summer. Present JVMI board member Elliot Klayman taught Messianic Bible courses for the teams and led the witnessing tours. “With a hand-held microphone and a battery-charged recorder,” Elliot remembers, “the group recorded their impressions and experiences. They sent them to the home office in Phoenix where they were edited and aired on the syndicated Jewish Voice Broadcasts program for its listeners to follow.” These accounts were also published in the “Jewish Voice Prophetic Magazine.”

“From city to city, in sync with the Holy Spirit, we piled into blue Volkswagen van,” recounts Elliot. “Once at street corners, parks, markets, and city centers, we ministered in music, in speech, and through distribution of tracts in various languages, including Hebrew, Arabic, and English. We experienced mixed responses with high points of overwhelming receptivity…” The Israeli soldiers they encountered were especially interested. “So many of them were thirsty for spiritual refreshment, and they were attracted to our ragged band of primarily young people who were like bulls in a barn, eager to be released to share their faith.”

Not everyone welcomed the witnessing teams, however. But the groups were bold, even in the face of opposition, and they continued to share their faith in Yeshua wherever they went. About 160 participants went through the 15 or so Bible School/Witnessing Tours put on by Jewish Voice Broadcasts. “Jewish Believers joined with non-Jewish Believers to further the Great Commission,” Elliot reflects. “We will never know the total impact that these early groundbreaking years in Israel’s Messianic history produced.”

Out of the Israel Witnessing Tours came the first ventures into film for Jewish Voice Broadcasts. Dennis Phillips accompanied Rick Bell to film the ministry activities in Israel. Dennis had been involved with Jewish Voice Broadcasts since the first day Louis Kaplan walked into KHEP radio station back in 1967 where Dennis had worked in Phoenix. In 1976, with Rick behind the camera and Dennis in charge of sound, the two followed Israel witnessing teams throughout Israel, capturing on film their street-corner singing, tract distribution, and the spontaneous sharing of the Gospel with passersby. The film was called “Comfort Ye My People,” and was shown in congregations around the U.S. and on Jewish Voice’s television program beginning in late 1978.

Meanwhile, in the early Jewish Voice years, Louis and Chira faithfully recorded programs and traveled the world to expand the broadcasts into other countries with large Jewish populations. Everywhere they went, they recorded the testimonies of Jewish believers in Yeshua. The tapes were brought back to Phoenix and produced into radio programs to inspire the listening audiences. In 1974, Jewish Voice Broadcasts reached into South America with Rev. Victor Sedacca conducting the broadcasts in Spanish to Argentina, Uruguay, and Paraguay. In 1975, the program began airing in Paris, France, with the local Rev. Lejb Feldman broadcasting in French.

Jewish Voice’s ten-year anniversary found them having again outgrown their offices on Osborn Road, and in 1977, the ministry purchased land to build a new headquarters.

Louis freely admitted that when he first heard the Spirit’s call to begin a radio ministry, he was a little reluctant to leave his rewarding evangelistic ministry to Gentiles. He quickly obeyed, however, and Jewish Voice Broadcasts enjoyed eleven years of exciting fruit and growth.

When in 1978, Louis heard the Lord, “out of the clear sky, at 1 o’clock in the morning” wake him up with a very clear, emphatic instruction to go into television, Louis said, “Oh, no! No! I don’t want television!” Finally, though, Louis said, “OK, Lord, if You want me to do it.” He was persuaded by the fact that through television, he could reach what he guessed was 100 times more people with God’s Word than radio. In the beginning, the Jewish Voice Broadcasts TV set was the Kaplan living room.

In 1986, the television show was renamed “LeChayim,” which means “To Life.” By this time, Dennis Phillips, who had years earlier resigned from KHEP and joined the staff of Jewish Voice Broadcasts, frequently filled in as host when Louis and Chira were traveling. Two years later, Dennis became the permanent host.

By the end of the 80s, a side-ministry of Jewish Voice saw the ministry sending Bibles into over 108 prisons across the country, changing the lives of many prisoners.

Shadows of the future

In the early 1990s, Louis and Chira Kaplan began hearing about a Messianic ministry focused on reaching Jewish people in the former Soviet Union through large-scale festivals. The ministry was headed by an American Jewish Believer living in St. Petersburg, Russia. That man was Jonathan Bernis.

Don’t’ miss Flashback Fridays on our Facebook page where you’ll see glimpses of our 50-year journey.

Discover the whole inspiring JVMI story with our beautiful, full-color coffee table book, Jewish Voice: A Look at 50 Years. Along with a fascinating narrative chronicling 50 years of ministry, this special edition includes biographies, stories, and reflections from television guests, partners, and staff as well as over 200 photographs.