The Miracle of Chanukah 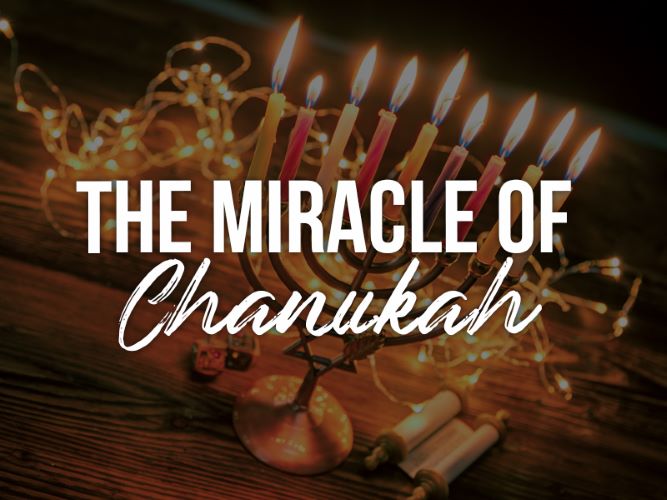 Maybe all you know about Chanukah is that it occurs in December, Jewish people light candles and they receive gifts for eight days. But what’s behind these details of observance is both miraculous and inspiring.

One thing to note before diving into the story of Chanukah is that throughout history, God’s enemy has been trying to annihilate the Jewish people because the promised Messiah would come from them. Since Jesus came to Earth, Satan continues to attack God’s Chosen People wanting only to destroy them because they are precious to God.

One of the devil’s assaults on the Jewish people came in the second century B.C.E. when Antiochus IV controlled Israel. This madman of a ruler went to great lengths to assimilate the Jewish people into his Seleucid Empire and suppress their faith in God. He used violence and murder to intimidate the Jewish people into worshipping false gods, and he massacred thousands who refused. He also took over the Temple, defiled it with idols and sacrificed pigs on the altar.

A Hebrew man named Mattathias and his son, Judah Maccabee, led a revolt against the oppression. The small band of fighters known as the Maccabees was far outnumbered, but by God’s hand, they fought the Seleucid armies and regained control of the Temple. It was a miraculous victory.

Seeing God’s Temple so offended, the Jewish people wanted to cleanse and rededicate it as soon as possible. However, all but one vial of oil for the Temple lampstand remained undefiled, and it was only enough to last one day. The lampstand was to burn continuously, and it would take eight days to make and purify more oil. In faith, the priests lit the lamp and consecrated the Temple back to God.

Another miracle happened. That small amount of oil burned the entire eight days until more was prepared. God provided for His people.

Chanukah is an eight-day celebration commemorating the miracle of the oil. It is also called the Festival of Lights and the Feast of Dedication. Jewish people celebrate by lighting eight Chanukah candles representing the eight days of light that one day’s worth oil shone in the Temple. Each successive night, they use what’s called the Servant Candle to light one more candle until all are burning on the eighth night.

For Messianic Jewish Believers, Chanukah’s miracles of victory and light reveal a picture of Yeshua (Jesus), the Light of the World, who gives us victory over sin and death. As the Chanukah lampstand grows brighter each successive night of the holiday, and gifts grow in value, so does our appreciation of the miracle God gave us in Yeshua. Jesus takes away our sin, making the way for us to come into fellowship with our Holy God. Jesus conquered death when He rose from the grave, and His victory became ours as He grants eternal life to all who believe in Him.

God is in the business of doing miracles. We see it in Chanukah, throughout Israel’s history and in the pages of our Bibles. We also see the God of miracles working His wonders during Jewish Voice Medical Outreaches. When medical intervention isn’t possible, God often performs miracles of healing through the Outreach’s Spiritual Care Ministry. These testimonies reach deeper into the communities you help us serve, and they continue to glorify Him long after an Outreach is complete.

And each time someone responds to the Gospel and places their faith in Jesus, it is a miracle.

Through your gifts to Jewish Voice, you can make those kinds of miracles happen.

A Day to Remember
We are praying for clear vision and big faith!
There’s an exciting trip in March that needs you on the roster!
Pray with us as we step into 2020
Transform more lives in 2020