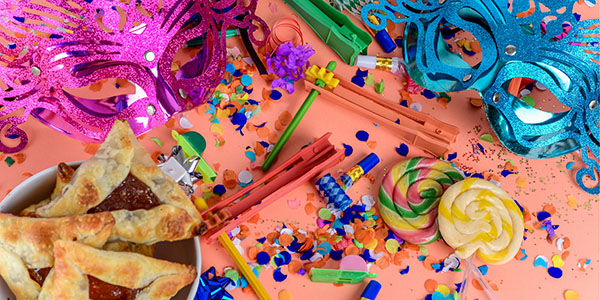 Purim – by ancient Jewish decree – is a party. It’s not one of the Jewish Feasts commanded by the Lord, but the book of Esther proclaims Purim is a celebration to be observed throughout all Jewish generations (Esther 9:28). And with good cause.

Purim marks another point in Jewish history when God intervened to save His people from utter destruction. The Jewish people have faced the threat of extinction time and time again through the millennia. Why is that? Simply put, Satan hates the Jewish people – because God loves them and chose them for His own. So, when God defeats the enemy’s plans to annihilate His people, it’s time to celebrate!

Here’s how God brought about the deliverance in the 5th century B.C.E.

The Jewish people were under the rule of King Ahasuerus. After he banished his disobedient queen, he conscripted young maidens from throughout the kingdom to enter a beauty pageant from which he would select the next queen. When the process concluded after a full year, the king chose Esther, a young Jewish woman who had kept her identity secret.

Mordecai, Esther’s cousin and guardian, overheard a plot to kill the king. He told Esther and thus saved Ahasuerus’ life. Officials recorded the event, but Mordecai received no thanks.

Haman, a wicked officer, convinced the king that the Jewish people were a threat. He persuaded Ahasuerus to issue an irrevocable decree offering payment to citizens who killed Jewish people on a selected day of the year. Haman cast lots to determine the day, and that’s where we get the word Purim, which means “lots” in Hebrew.

When Mordecai heard about the decree, he begged Esther to approach the king to save their people. “Who knows whether you have attained royal status for such a time as this?” he said (Esther 4:14). Esther knew that going to the king without an invitation was strictly forbidden, punishable by death if he didn’t welcome her.

Esther determined to go despite this dire threat, saying, “if I perish, I perish” (Esther 4:16). She fasted and went to the king three days later. The king received her by extending his scepter to her, and Esther invited him and Haman to a banquet where she would explain her request.

Before the banquet, Ahasuerus discovered nothing had been done for the man who had saved his life. The king remedied that by lavishly and publicly honoring Mordecai – and ordering Haman – much to his distaste – to oversee it all.

At a second banquet, Esther revealed her Jewish identity and exposed Haman as the man whose plan threatened her life and that of her people. The king was outraged. He ordered Haman hanged and that his position be given to Mordecai. The Jewish people were allowed to defend themselves on the decreed day, and we know that it was God who provided a resounding victory, saving the Jewish people from destruction.

Curiously, the book of Esther never mentions God. But it’s easy to see His involvement at every turn.

The book of Esther outlines four elements for observing Purim: feasting, celebration, giving food gifts to one another, and gifts to the poor (Esther 9:22).

Friends and relatives gather for costume parties and festive meals. Hamantashen are Purim’s most popular food tradition. These triangular, filled cookies are said to represent Haman’s hat or his ears.

Celebrations include reading the book of Esther at synagogue and plays re-enacting the Purim story. Audiences cheer loudly for Mordecai and shout boisterous boos for Haman. They stomp their feet and rattle loud noisemakers every time Haman is mentioned to “blot out” his name.

Sending mishloach manot, or food gifts, is an important Purim custom. Jewish tradition requires a minimum of two ready-to-eat foods. However, many people send larger gift baskets of food and drink to friends of the same gender.

Gifts to the Poor

Traditional Jewish practice gives two gifts to the poor at Purim, one to each of two people. Even the poor are required to give something to charity. Gifts can be money, food, drink or clothing. It’s a lovely way to ensure every Jewish person can celebrate the Purim victory.

God wants us to celebrate the victories He has won for us. Amid your Purim festivities this year, take some time to remember and rejoice over what He has done for you personally. Most of all, celebrate the gifts God has given you in Messiah Jesus: salvation, redemption, reconciliation with Him, forgiveness, abundant life, peace, joy, His presence through the Holy Spirit, and the hope that awaits you in eternal life with Him.

A Joyous Purim to You!

98.9% is another reason to rejoice at Purim
Join us as we stand in prayer
The Watershed of Passover
300 Ethiopian-Jewish immigrants land in Israel
Biden to Iran: no on lifting sanctions