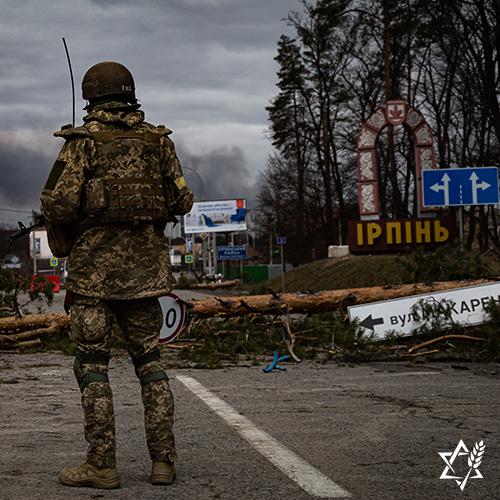 A Note From Jonathan Bernis:

As I write to you today, I’m reminded that God promises to be close at hand with strength and peace, no matter what His people are facing.

“The LORD gives strength to His people; the LORD blesses His people with peace.” Psalm 29:11 (NIV)

I find tremendous comfort and hope in these words that have been ultimately realized in the coming of His Son, Yeshua (Jesus), the Messiah.

There’s no greater comfort, peace or hope that God could give, knowing He’s close and active in our lives. I pray you’ll embrace this for yourself as you work through challenges in your life or concerns that are heavy on your heart.

I also pray that you’ll continue to stand with us in prayer . . . and ask God to strengthen His people, give them peace and change the hearts of their enemies.

Thank you again for your partnership.

Since the start of the February 24 invasion, Russian forces have taken control of a big chunk of territory across Ukraine's southern flank above Crimea, which Russia annexed in 2014.

According to The Jerusalem Post, Russia is slowly pushing Ukrainian forces out of the Luhansk and Donetsk regions of east Ukraine, which it has recognized as independent states.

“We are going to liberate all of the Donbas,” Russian Ambassador Andrei Kelin told reporters in an interview late last week when asked how the war might end.

According to The Jerusalem Post, Ambassador Kelin said that it was difficult to see Russian and Russian-backed forces withdrawing from the south of Ukraine and that Ukraine's soldiers would be pushed back from all of Donbas.

Sooner or later, Ambassador Kelin said, Ukraine would have to decide: strike a peace deal with Russia or “continue slipping down this hill” to ruin.

In addition to speculating on the end of the conflict, Ambassador Kelin also told reporters that the West did not understand the true causes of the conflict and had ignored Russia's concerns.

“The narrative is very short: Russia has been aggressive against an innocent Ukraine,” Kelin said. “This is not true at all.”

According to the Ambassador, President Putin says the “special military operation” in Ukraine is necessary because Moscow had to defend Russian-speaking people against persecution which he says the West has ignored.

He also casts the war as a necessary revolt against the United States, according to The Jerusalem Post, which he says has humiliated Russia since the 1991 fall of the Soviet Union by enlarging NATO eastwards and was using Ukraine to threaten Russia.

President Biden arrived in Israel this week as the first stop before his visit to Saudi Arabia. One of the primary purposes of this visit to the region, Biden said at a press conference in Spain last month, is to “deepen Israel’s integration in the region.” The Jerusalem Post speculates that Biden is using the Israel stop to deflect criticism about visiting Saudi Arabia. And while the president’s visit during an election campaign may provide photo-ops for the “prime time” news, The Jerusalem Post asserts that Israelis do not vote based on whom the U.S. president endorses.

The bloc of parties loyal to former prime minister Benjamin Netanyahu could receive 61 of the Knesset’s 120 seats in the upcoming election, enabling it to form a government, according to reports from The Times of Israel last week. With nearly four months remaining before Israelis head to the polls on November 1, anything can change. And while Israel’s opinion polls can often be unreliable, they do influence the decision-making of politicians and voters, particularly in the run-up to the deadline when party lists must be finalized.

Pray with us this week: