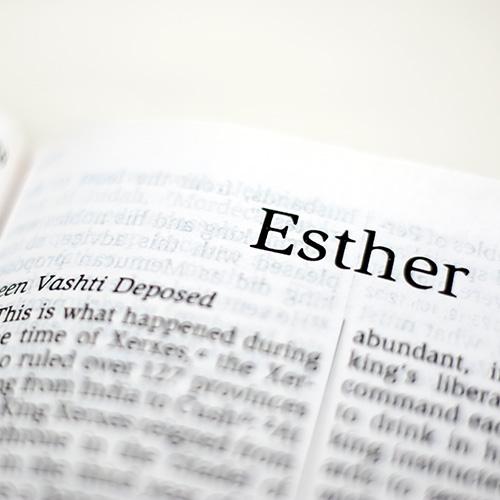 It’s a remarkable “God story” told in the only book of the Bible that never mentions God. The book of Esther describes the history behind Purim, an annual Jewish holiday known for its festive celebrations. God was at work behind the scenes, setting circumstances up to deliver the Jewish people from certain destruction. In the Purim story, two heroes emerge to inspire and challenge our relationships with the Lord today – Mordecai with his undeterred faith and Esther with her resolute courage.

It was the 5th century B.C.E., and the Jewish people were living in Persia. Xerxes (also called Ahasuerus), the King of Persia, had conquered and resettled them throughout his empire.

After Xerxes’ queen publicly disobeyed him, he banished her and conscripted young maidens from throughout the kingdom as candidates for her replacement. The women went through a year-long beautification process, after which the king chose Esther, a young Jewish woman who had kept her lineage secret.

One day, Esther’s cousin and guardian Mordecai overheard a plot to kill Xerxes. He told Esther and thus saved the king’s life. The event was documented, but Mordecai received no thanks.

Haman was a wicked officer close to Xerxes. He relished his position and got the king to decree that citizens bow before him. God-fearing Mordecai refused, enraging Haman. Haman convinced the king that all Jewish people were a threat because of their allegiance to the Lord. He persuaded Ahasuerus to issue an irrevocable decree offering payment to citizens who killed Jewish people on a selected day of the year. He cast lots (or purim) to determine the day.

When Mordecai heard of the plan to wipe out the Jewish people, he sat in front of the king’s gate wailing in sackcloth. Esther sent word to learn why, and Mordecai begged her to approach the king and save their people. Esther reminded him that going to the king without an invitation was punishable by death if he didn’t welcome her.

Mordecai told them to reply to Esther with this answer, “Do not think in your soul that you will escape in the king’s household more than all the Jews. For if you remain silent at this time, relief and deliverance will arise for the Jews from another place—but you and your father’s house will perish. Who knows whether you have attained royal status for such a time as this?”  ––Esther 4:13–14 (TLV)

Mordecai shows extraordinary faith in his reply to Esther. He knew beyond doubt that, though he, Esther and others may not escape death, God would not allow the Jewish people to be utterly destroyed. Why? Because God had made a covenant promise to the Jewish people that they were His people forever. He set His affection on Israel as His treasured possession, and His covenants are eternal (See Deuteronomy 7:6–9, Genesis 12:2–3, Genesis 17:7, Jeremiah 31:34–36.)

Mordecai recognized something else – God is sovereign and able to orchestrate circumstances to place people in positions to accomplish His purposes. Mordecai told Esther, “Who knows whether you have attained royal status for such a time as this?” (See Esther 4:13-14.)

Esther sent this to reply to Mordecai, “Go! Gather together all the Jews who are in Shushan and fast for me. Do not eat or drink for three days, night or day. My maids and I will fast in the same way. Afterwards, I will go in to the king, even though it is not according to the law. So if I perish, I perish!” ––Esther 4:15–16

Esther knew her life was in jeopardy by going to the king without an invitation. She considered Mordecai’s words and determined to go anyway. Her resolve to do the frightening– but right – thing shows her tremendous courage. She said she would go before the king and, “if I perish, I perish” (Esther 4:16). What gave Esther the courage to go against her fear and do what needed to be done? She saw before her the consequences if she didn’t, which bolstered her bravery to act. Though not directly stated, we can clearly see that she also entrusted the results to God. She determined to fast for three days and enlisted Mordecai and all Israel to join her, and then she would approach the king. She certainly sought the Lord for direction and favor during those days, and she emerged with an unusual plan.

The king received Esther and asked what she desired. Esther invited him and Haman to a banquet where she would explain her request.

Before the banquet, Xerxes discovered that nothing had been done for the man who earlier saved his life. He ordered Haman, of all people, to parade Mordecai through the city in stately fashion, hailing him as highly honored by the king.

At a second banquet, Esther revealed her Jewish identity and exposed Haman as the man whose plan threatened her life and that of her people. The king was outraged. He ordered Haman hanged and his position given to Mordecai. The Jewish people were allowed to defend themselves on the decreed day, and we know that it was God who provided a resounding victory, saving the Jewish people from annihilation.

In his new position in the king’s command, Mordecai decreed that Adar 13 and 14 on the Jewish calendar were to be days of celebration among the Jewish people, days of remembering how the Lord turned their sorrow into joy. He stipulated four observances: feasting, celebrating, sending food gifts to one another and giving gifts to the poor.

Today, Purim is a very festive holiday of the Jewish year. Along with observing Mordecai’s four commands, Purim is filled with costume parties and lively re-enactments of the Purim story. Whenever Haman’s name is mentioned, audience members boo, stomp their feet and rattle noisemakers called graggers – to symbolically blot out his name. Traditional Purim foods include Hamantashen – cookies filled with jams or other tasty delights. These cookies are triangular-shaped, representing Haman’s hat, or perhaps his ears, according to tradition.

Regardless of whether you observe Purim, you can take personal strength from Esther’s courage and Mordecai’s faith. God calls each of us to entrust our lives to Him as we let Him accomplish His purposes through us. And He invites us into His Word to discover His fullness there. He beckons us into a stronger, higher and deeper faith in Him. He challenges us to believe His Word and stand unshakably on His steadfastness.

In what ways might God be combining the faith and courage challenges of the Purim story to beckon you deeper in your relationship with Him?