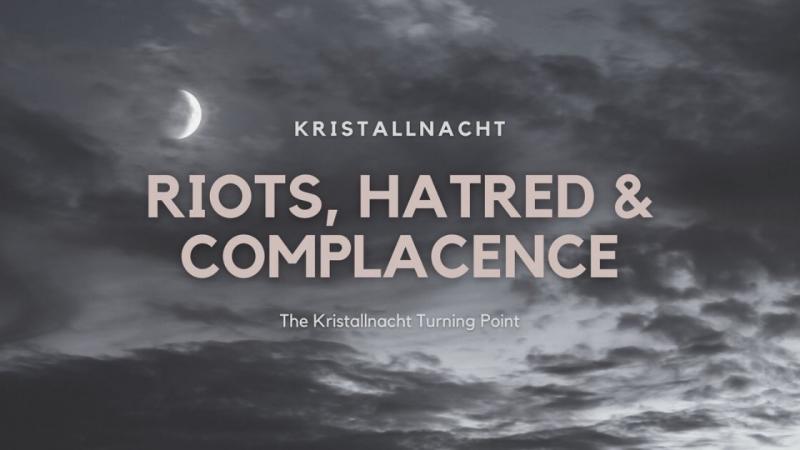 On the morning of November 9, 1938, Jewish Germans greeted the day, unaware that the coming evening would bring a nightmare.

For five years, Hitler had stalked them. He began by infringing on their freedoms but soon moved on to blatantly take those freedoms away. The Jewish people lost more of their rights every year.

A strategic propaganda campaign had chipped away at the general population’s sense of decency, and much of the country had begun to despise the Jewish people. First came a nationwide boycott of Jewish businesses. Next was the sweeping termination of Jewish employees from civil, state and university jobs. Then, burning books by Jewish authors, barring Jewish doctors from German hospitals, stripping voting rights from Jewish people, and the forced registration of all Jewish property.

As the sun rose on Germany and Austria that cold November morning, the Jewish citizens had no idea that, by nightfall, their oppressed lives would see yet another, and more traumatic, turn for the worse. One that would change the trajectory of their lives and history forever.

That day, piles of bricks would mysteriously appear along city streets in the business district. Telegrams to local police and fire departments had been clear: stand down and don’t interfere.

As night fell, it began – a pre-planned riot that became known as Kristallnacht, the Night of Broken Glass. Wild mobs of ordinary citizens hurled bricks to smash the windows of Jewish businesses and then ravaged the stores with looting and vandalism.

Rabid with hatred and pack-mentality adrenaline, crowds joined Nazi soldiers in ramming through the doors of Jewish homes to ransack the interiors and arrest Jewish men.

Bands of aggressors murdered 91 Jewish people that night, assaulting countless others. They destroyed hundreds of synagogues and thousands of Jewish businesses, homes, schools and hospitals. Tens of thousands of Jewish men were dragged off to concentration camps.

Ruth Barnett’s father escaped the violence by hovering on the fringes of the riot. Ruth shared her father’s story in a video published by the Encyclopedia Britannica. She describes how he took her 7- year-old brother by the hand and walked on the edge of the crowd, blending in unnoticed. She knows that if her brother had been home, the mob might have been so angry at not finding her father that they may have beaten or even killed her brother. Ruth is certain that her father’s clever and daring action saved both of their lives that night.

Kristallnacht was a turning point in Hitler’s regime. It showed him that the ordinary people of Germany and Austria would allow him to do these injustices. Whether they joined him outright in his hatred of the Jews or simply stood by out of fear or complacency, their behavior that night spoke loudly. And Hitler knew he could proceed with his plans to exterminate the Jewish people entirely. He deported millions of European Jews to death camps and ultimately murdered 6 million of them.

Kristallnacht and the years of anti-Semitism and propaganda that preceded it are a warning to us today. We must never forget what hatred and complacency can lead to, and we must speak up against anti-Semitism whenever we encounter it.