“But you will receive power when the Holy Spirit comes on you; and you will be my witnesses in Jerusalem, and in all Judea and Samaria, and to the ends of the earth”

Last week was Shavuot/Pentecost – a time of celebration and a time to reflect on our faith. At the same time, we continue to deal with the pandemic and other tragic events that are headlining the news.

We need an outpouring of the Holy Spirit across Israel, the United States and our world. So many are hurting. There is anger. Fear. Despair.

It is more important than ever to be witnesses for Jesus our Messiah – as the verse says above – to the ends of the earth. And that starts in your home and your community. Love and encourage others. Offer hope. Share your faith. And be in prayer.

There are some interesting developments in the news this past week related to Israel. Please read about them below and continue to lift all of this up to our Lord.

For decades, the Arab world maintained an intense hostility toward Israel along with a widespread belief that “Palestine” must be liberated at all costs. But this belief is changing in Saudi Arabia.

“Today, the public is informed. There is a deluge of opinions against the Palestinian cause,” explained Saudi writer Abdulhameed Al-Ghobain in an interview this month with BBC Arabic, according to Israel Today.

And concerning how Saudi Arabia views its relationship with Israel, Al-Ghobain said, “It is no longer just public support for normalization and building ties with Israel. Our public has turned against the Palestinians in general.”

This is a dramatic change that seems to stem from strategic national interests becoming the top priority for Saudi Arabia.

“It is in our strategic interest, and in keeping with our future economic interests, to maintain real relations with Israel,” says Al-Ghobain. “Israel is an advanced country and we can benefit from it.”

It comes down to many in the Arab world realizing what many in Israel have said all along: a Palestinian state, especially one heavily influenced by Hamas, will only further destabilize the region. 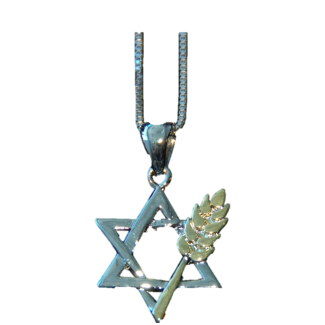 When you give a gift of $25 or more to provide support for Messianic ministries in Israel and critical resources to Jewish people around the world, we’d like to bless you by sending our Star of David with Wheat Necklace. This beautiful piece of jewelry features the logo of Jewish Voice with a silver Star of David and a gold wheat stalk on a silver chain. Request yours today!

The Palestine Liberation Organization (PLO) Executive Committee “confirmed” Palestinian Authority (PA) President Mahmoud Abbas’ recent announcement on renouncing all agreements and understandings with Israel and the U.S. This includes security coordination between the PA security forces and Israel Defense Forces (IDF), as well as the termination of security agreements with the U.S. administration.

The Palestinians will also continue to “pursue Israeli officials for war crimes and crimes against humanity, including the crimes of settlement, annexation and assaults on Christian and Islamic religious sites,” the committee added.

And the committee is calling on Arab states to review their relations with the U.S. administration and Israel in light of the “annexation” plan.

“There’s a feeling that most of the world stands with us on the issue of annexation,” a senior Palestinian official told The Jerusalem Post.

In addition, the PLO called for “escalating popular resistance in order to defeat and end the occupation and achieve national independence of the State of Palestine on the 1967 borders.”

PA Prime Minister Mohammad Shtayyeh warned that if the Israeli “annexation” plan is implemented, it would pose a threat to regional security. He also praised international and Arab rejection of the plan and called for “more serious stances to prevent Israel from implementing its annexation decision.”

A three-judge panel that comprises the International Criminal Court’s (ICC) pre-trial chamber has asked the Palestinian Authority for clarification regarding PA President Mahmoud Abbas’ statement about the termination of all agreements with Israel.

Abbas’ statement, made in response to Israel’s push to declare sovereignty over certain parts of the West Bank, has put the PA in a difficult spot.

The ICC justices are trying to find out whether his comments apply to the Oslo Accords – signed in 1993 and 1995 – which helped establish the PA as an entity.

If the PA nullifies accords that grant them autonomy, they may not be able to claim state status before the ICC to charge Israel with war crimes in the West Bank, Gaza and East Jerusalem, according to YNet News.

The judges have given the PA a June 10 deadline to respond.

Join me in thanking God that He is our hope and we can trust Him completely no matter our circumstances. Please pray with me for:

We all need shalom right now
Two great reasons to visit Israel with us
Stand with us in 2021!
Potential for another strict lockdown in Israel
Entering 2021 with Thanksgiving and Praise!