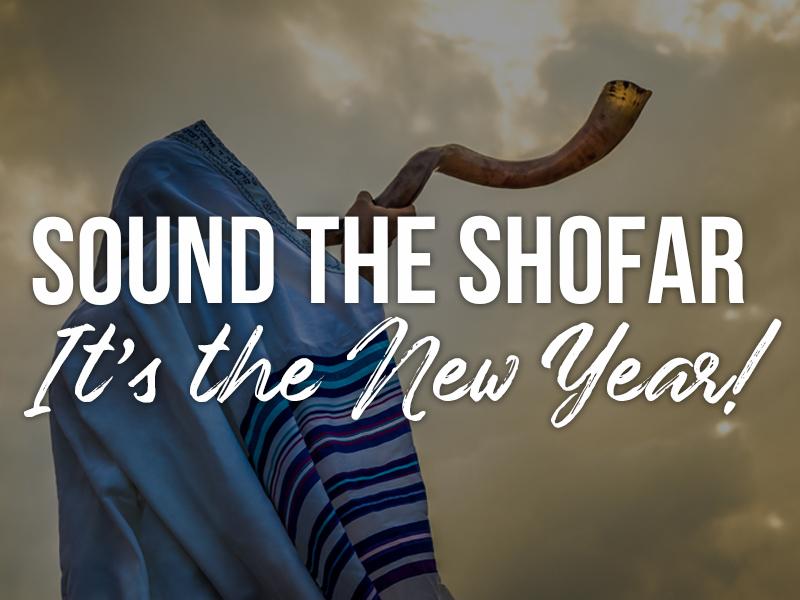 While it may be a few months off on the Gregorian calendar, the New Year is almost here on the Jewish calendar.

Jewish tradition teaches that God created the world on the first day of the Hebrew month of Tishrei. This Jewish New Year is called Rosh Hashanah (Roshe Hah-SHAH-nah), which means “head of the year.” This year, Rosh Hashanah begins at sunset on September 29 and ends at sundown September 30.

This date is also the day God appointed as the Feast of Trumpets, or in Hebrew, Yom Teruah (Yohm Tare-OO-ah). The two holidays combine to begin the Fall Feasts of the Jewish year.

The Rabbis teach that at Rosh Hashanah, God pronounces judgment on each of His people for the coming year and that He seals that judgment on Yom Kippur (Yohm Ki-POUR), or the Day of Atonement.

Therefore, Rosh Hashanah and the days leading up to it are a time for self-examination and repentance as Jewish people seek God’s forgiveness and favor for the coming year. The 10 days after Rosh Hashanah are known as the Days of Awe when we intensify our reflection and focus on repentance and making amends with others. The Rabbis teach that during this time, God may yet alter what was to be an unfavorable decree on someone and grant a good year ahead.

As Messianic Jews, we know that God has sealed Believers in Yeshua with the Ruach HaKodesh (ROO-akh Ha-ko-DESH), the Holy Spirit, sealing us until the time of the Messiah’s return in glory (Ephesians 1:13-14).

Jewish people celebrate Creation and the start of a new year in synagogue services with special liturgy, prayers and blessings. Because the New Year falls on the Feast of Trumpets, services also include 100 blasts of the shofar (SHO-far), a trumpet made from an animal horn. Family celebrations include special meals and sweet foods to symbolize the hope of a sweet new year. Apples dipped in honey are a traditional treat. Holiday greetings include “A Good and Sweet Year!” and “For a Good Year!”

Messianic Jews also recognize that there is a prophetic aspect to Rosh Hashanah and Yom Teruah. All the Jewish Feasts that God ordained in Leviticus chapter 23 in some way serve as pictures of the coming Messiah, Yeshua (Jesus). The Spring Feasts of Passover, First Fruits and the Feast of Weeks contain prophetic images of Yeshua’s first coming – specifically, His death, resurrection and the giving of the Holy Spirit.

The Fall Feasts hold foreshadows of events related to His second coming – the prophesied last trumpet call, His final judgments on the earth, the redemption of Israel as they recognize their Messiah, and the coming Messianic age when Yeshua will reign as the Son of David over all the Earth . The Feast of Trumpets is often associated with the initiation of the Messianic Age and the raising of the dead in Messiah.

May your new year be blessed with sweet and good things from God’s hand.

For a good year!