Tisha B’Av – A Day of Mourning 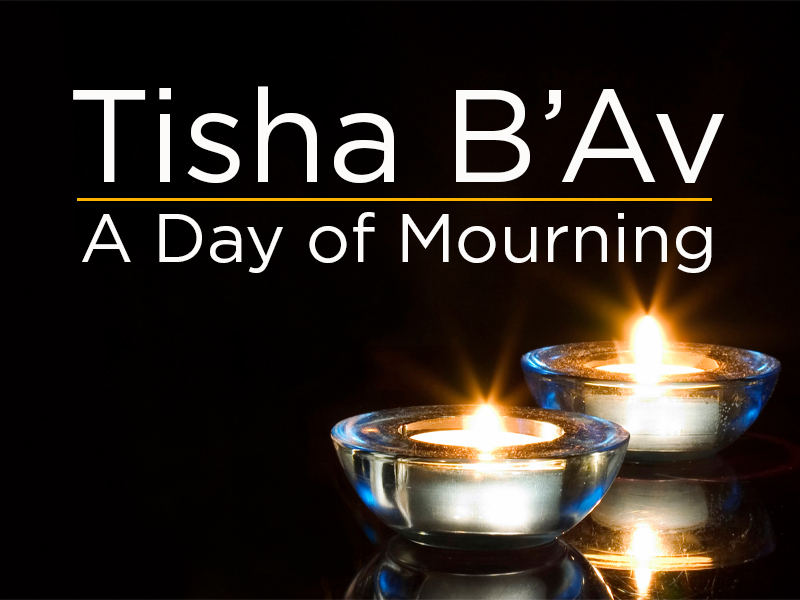 The Jewish people have endured intense tragedies over their history as a collective, though now scattered, people. Defeats, captivities, and persecutions are all across their timeline as God’s Chosen People. While various calamities have fallen on different Gregorian calendar dates, it’s astonishing that, when translated to the Jewish calendar, many catastrophic events in Israel’s history occurred on the same Jewish date – the ninth day of the Hebrew month Av. Tisha B’Av means the ninth of Av, and it is a day of mourning for Israel and Jewish people everywhere.

Tisha B’Av begins at sunset on July 29, 2020. Mourning includes fasting from food, water and activities representing ease and luxury. Expressions of grief include abstaining from bathing/washing, using perfumes or colognes, intimacy, wearing leather shoes and sitting comfortably for part of the day.

According to Jewish tradition, one biblical event starts off the list of tragedies occurring on Tisha B’Av. It is believed that the 12 spies sent from the wilderness to scope out the Promised Land returned on Tisha B’Av. Ten spies gave a frightful report and persuaded the Israelites to disbelieve God and not trust Him that they could take the Land He’d said He would give them. As a result, the original generation who left Egypt would not be allowed to enter the Promised Land. The Israelites remained in the wilderness 40 years until everyone over 20 years old at the time of the spies’ report passed away.

Other tragic events that have occurred on Tisha B’Av include:

On Tisha B’Av, we weep for God’s Chosen People over the calamities and tragedies in Israel’s history. And we pray that the sadness of this day will turn hearts to God and open eyes to see His promised Messiah, Yeshua, within the Hebrew Scriptures.

My soul longs for You at night, yes, my spirit within me seeks You. For when Your judgments are in the earth, the inhabitants of the world learn righteousness.

Israel's powerful warning to Iran
God’s relentless pursuit calls for our relentless prayer!
We all need shalom right now
Two great reasons to visit Israel with us
Stand with us in 2021!