The War that Won Jerusalem 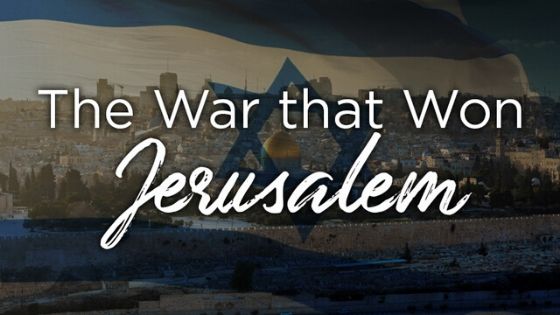 At the outset of a war, no one knows how long the fighting will last. The longest war in history persisted 781 years, between the Spanish Empire and the Moors. The shortest battle, the Anglo-Zanzibar War of 1896, lasted a mere 38 minutes.

Jerusalem Day commemorates the second shortest war in history, which arose between the enemies of Israel and the young Jewish country. It occurred from June 5 to June 11, 1967, and is aptly named the Six-Day War.

Jerusalem Day, or Yom Yerushalayim, 2020 begins at sunset on May 21. Events include memorial services for those who died in the Six-Day War as well as parades, parties, special meals, prayer services and much more.

The Six-Day War was monumental in modern Israel’s history, second only to her War of Independence in 1948‒1949. Israel had not intended to fight at all in 1967 but was drawn into battle by Arab neighbors whose hunger to destroy her was agitated by Russian-planted lies. After six short days, Israel gained East Jerusalem from Jordan’s control and the Golan Heights from Syria.

Both acquisitions are of incalculable value to Israel. Taking possession of East Jerusalem meant that for the first time in 2,000 years, an undivided Jerusalem belonged to Israel again. Obtaining control over the Golan Heights was paramount to Israel’s security. The area lies elevated above Israel’s former border with Syria. In Syrian control, the Golan leaves Israeli citizens vulnerable to the kind of sniper attacks that took place incessantly before the Six-Day War.

Years of such turmoil and predatory actions by enemies of Israel – her neighbors in surrounding Arab nations – laid the foundation for 1967’s brief but fierce battle. Below is a summary of events leading up to and during the Six-Day War.

God brought about the rebirth of Israel in a single day back in 1948. Since then, the enemies of Israel have relentlessly aimed to injure and kill her citizens and, ultimately, eliminate her existence.  But she remains the nation of God’s people and a key component in His prophetic plans.

Jerusalem has always been the capital of Israel. Her ancient kings resided there. The first and second Temples were located there, which meant Jerusalem was also the religious center of Israel. The third Temple will be built there, and when Yeshua (Jesus) returns to usher in the coming age, He will come to Jerusalem.

The second shortest war in world history resulted in a unified Jerusalem returned to Israeli hands. It is an exciting event on God’s prophetic timeline, revealing that we are, indeed, living in the Last Days.