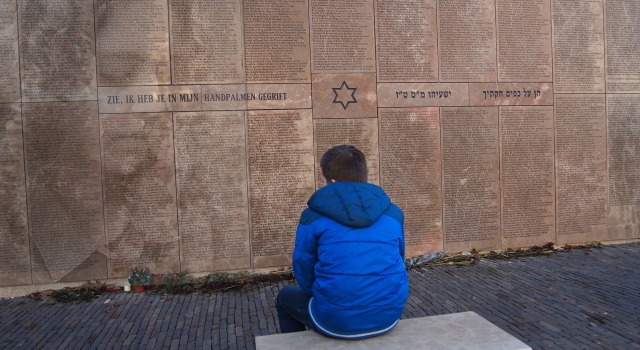 Eight-year-old Esther Gever laid hold of her father’s arm in their Vienna home, facing off against the Nazi soldier trying to take him away. “No! You cannot take my father!” she asserted. “Why would you take my father?” The soldier growled back, “Because he is a Jew.” Esther persisted, “You will not take him! He didn’t do anything.” The soldier had had enough of this little girl standing in his way, slowing down his dirty business that night. He grabbed Esther by the front of her shirt and threw her hard against the wall. Esther blacked out. What was Kristallnacht? Scenes like this one – played out in various ways in Jewish homes all across Hitler’s domain.

Kristallnacht defined means “night of broken glass.” The event was a coordinated attack on the Jewish people in Germany and other areas under Nazi control. On the night of November 9–10, 1938, German citizens smashed the windows of Jewish businesses, looting and vandalizing till nothing was left to salvage.

Spurred by years of anti-Semitic propaganda and riled by a Jewish teenager’s revenge murder of a German diplomat, ordinary citizens formed mobs. They followed German soldiers to Jewish homes to arrest Jewish men, young and old, and terrorize Jewish families. They threw bricks through windows, rammed through front doors and ransacked Jewish families’ possessions. Some seemed determined to do as much damage as possible – slashing pillows and pictures, smashing furniture and stealing valuables. They roughed up whomever they chose or got in their way.

Some of the Jewish people had been vaguely alerted in advance. They’d heard rumors that something was afoot that day or received somber advice from kind-hearted neighbors or Jewish relatives in other cities already hit: “Stay home. Tell the men to hide. Do not go outside.” Jewish people who were unfortunate enough to be on the streets were often savagely beaten by people they once considered neighbors and friends – along with thugs brought in to accelerate the frenzy.

Mobs set fire to synagogues, cheering as new bursts of flame erupted. When a synagogue blaze was risky for nearby non-Jewish structures, crowds instead drug sacred books, Torah scrolls, and furnishings into the street and made a bonfire of them. Inside, they ransacked the worship houses and stole valuables.

Local authorities told to stand down

Meanwhile, police stood by, unable, unwilling and ordered not to do anything – even when bloodthirsty mobs invaded Jewish orphanages and hospitals, rousting little ones into the cold night in their nightshirts and bare feet.

What was Kristallnacht? It was a night of broken humanity. In all, Nazi soldiers and wild mobs murdered 91 Jewish people, destroyed hundreds of synagogues, looted and ransacked thousands of Jewish homes, businesses, schools and hospitals. Aside from this, they arrested tens of thousands of Jewish men, hauling them off to concentration and labor camps. One of them was Esther’s father.

For weeks, Esther’s family inquired with Jewish neighbors trying to learn where Hitler’s soldiers had taken the men. After three weeks, they received a censored postcard from Dachau concentration camp. Between blackened-out words, they read that he loved and missed them and that he was “well” – though they didn’t trust that he was. Many of the men arrested on Kristallnacht were released after a few months. The following year, after Esther’s father returned home, the family fled to Poland. When the war’s danger followed them, they headed to Siberia, where Esther’s mother died. Esther moved to Israel in 1949 and to the U.S. in 1959.

Along with a night of unchecked – indeed encouraged – rioting and hatred toward Jewish people, Kristallnacht was also the proof Hitler needed to proceed with his plans in confidence. The Night of Broken Glass showed him that the masses would not rise up against his plans to eliminate the Jewish people from among them. For the most part, Kristallnacht proved that Hitler had successfully stirred the non-Jewish population to wild hatred of the Jewish people or frightened them enough to stand by and let it unfold. And so he proceeded with his “Final Solution,” executing 6 million Jewish people before he was stopped.

What was Kristallnacht? It was a warning for us today, showing us how human nature can be turned, manipulated, and run wild with prejudice. Anti-Semitism is very much alive today, more than 70 years after the horrors of the Holocaust. This Kristallnacht, and every day, let’s pray for God to bring it to an end and for His peace to reign on Earth. Pray with us for Holocaust survivors everywhere to come to know the eternal peace and love of Messiah Jesus.