Yeshua HaMashiach – Anointed to Save

Who is Yeshua HaMashiach?

Yeshua HaMashiach (Yeh-SHOO-ah Ha-Mah-SHEE-akh) is Hebrew for “Jesus the Messiah.” Yeshua is a shortened version of the name Yehoshua (Yeh-HO-shoo-ah), which means “Adonai saves.” Mashiach is the Hebrew word for Messiah and means “anointed one.”

Old Covenant Scriptures speak of the coming Messiah who would be God’s anointed One to deliver Israel and all mankind. Most Jewish people living at the time of Jesus believed the Messiah would physically save them from their oppression under Roman rule. They did not recognize that the prophets foretold of a much greater freedom.

Israel has had many enemies over the millennia, but none so dangerous as the one who seeks to keep her from recognizing God’s sole provision for eternal reconciliation to Him. Satan prowls and roars, schemes and steals, attacks and accuses (1 Peter 5:8, John 10:10, Ephesians 6:16, Revelation 12:10). He does everything in his power to mislead, blind, confuse and distract people, particularly the Jewish people, from the Messiah.

While the Jewish people looked for a savior to physically free them from bondage to Rome, God sent Yeshua HaMashiach to spiritually save us from bondage to sin, offering us eternal spiritual freedom.

The prophets foretold many details of the Messiah’s coming. Differing biblical descriptions have led some Jewish people to believe there would be two Messiahs: one who would suffer and die, and one who would conquer and reign. The Scriptures, in fact, describe two separate comings of one Messiah – Yeshua HaMashiach, Jesus the Anointed One.

In His first coming, Yeshua HaMashiach came as the Suffering Servant we see in Isaiah chapter 53. He came to fulfill our irreparable need of reconciliation to God. He proved Himself a humble servant offering us undeserved love and grace.

“Surely He has borne our griefs and carried our pains” (Isaiah 53:4).

“…because He poured out His soul to death and was counted with transgressors” (Isaiah 53:12b).

Anointed to Suffer and Die

Yeshua HaMashiach was appointed by God to suffer and die on our behalf. Anti-Semitic ideology wrongly blames the Jewish people for Yeshua’s death. But the Bible is clear that it was man’s sin that placed Jesus on the executioner’s stake.

“Because of oppression and judgment, He was taken away. As for His generation, who considered? For He was cut off from the land of the living, for the transgression of my people ‒ the stroke was theirs. Yet it pleased Adonai to bruise Him. He caused Him to suffer” (Isaiah 53:8, 10a).

“His appearance was disfigured more than any man, His form more than the sons of men” (Isaiah 52: 14b).

“From that time on, Yeshua began to show His disciples that He must go to Jerusalem and suffer many things from the elders and ruling kohanim and Torah scholars, and be killed, and be raised on the third day” (Matthew 16:21).

“Was it not necessary for Messiah to suffer these things and to enter into His glory?” (Luke 24:26).

Yeshua HaMashiach took upon Himself the penalty that we deserve for our sin (Isaiah 53:8). In doing so, He provided for and offered us complete atonement.

“The Righteous One, My Servant, will make many righteous and He will bear their iniquities” (Isaiah 53:11b).

“We all like sheep have gone astray. Each of us has turned to his own way. So Adonai has laid on Him the iniquity of us all” (Isaiah 53:6).

“She will give birth to a son; and you shall call His name Yeshua, for He will save His people from their sins” (Matthew 1:21).

“For God so loved the world that He gave His one and only Son, that whoever believes in Him shall not perish but have eternal life. God did not send the Son into the world to condemn the world, but in order that the world might be saved through Him” (John 3:16–17).

“And it shall be that everyone who calls on the name of Adonai shall be saved” (Acts 2:21).

Scriptures prophesied that, while God’s Anointed One would suffer and die, He would also rise from the dead. Yeshua HaMashiach did just that.

“For You will not abandon my soul to Sheol, nor let Your faithful one see the Pit” (Psalm 16:10).

“He was cut off from the land of the living for the transgression of my people… If He makes His soul a guilt offering, He will see His offspring, He will prolong His days, and the will of Adonai will succeed by His hand” (Isaiah 53:8a, 10).

“For I also passed on to you first of all what I also received ‒ that Messiah died for our sins according to the Scriptures, that He was buried, that He was raised on the third day according to the Scriptures, and that He appeared to Kefa [Cephas, or Peter], then to the Twelve. Then He appeared to over five hundred brothers and sisters at one time” (1 Corinthians 15:3‒6a).

At His Second Coming, Yeshua HaMashiach will return as the conquering King foretold in the Hebrew Scriptures. At this time, the Jewish people will recognize Him as their Messiah.

“Then I will pour out on the house of David and the inhabitants of Jerusalem a spirit of grace and supplication, when they will look toward Me whom they pierced. They will mourn for him as one mourns for an only son and grieve bitterly for him, as one grieves for a firstborn” (Zechariah 12:10).

“And then they will see the Son of Man coming in clouds with great power and glory” (Mark 13:26).

“Look, He is coming with the clouds, and every eye shall see Him, even those who pierced Him. And all the tribes of the earth shall mourn because of Him. Yes, amen!” (Revelation 1:7).

After the Messiah returns, God will usher in the long-awaited Messianic age in which Yeshua HaMashiach will reign eternally.

“The scepter shall not pass from Judah, nor the ruler’s staff from between his feet until he to whom it belongs will come” (Genesis 49:10).

“He shall reign over the house of Jacob for all eternity, and His kingdom will be without end” (Luke 1:33).

“Then the seventh angel trumpeted, and there were loud voices in heaven saying, ‘The kingdom of this world has become the kingdom of our Lord and of His Anointed One. And He shall reign forever and ever!’” (Revelation 11:15).

To learn more about how Yeshua HaMashiach fulfilled Messianic prophecies of the Tanakh, click to read “Who is Yeshua HaMashiach?” Discover the astounding mathematical probabilities that one man could fulfill even a small number of the hundreds of prophecies that Jesus did. 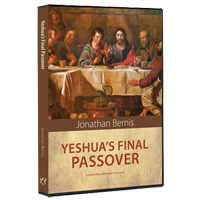 In this inspirational DVD, filmed on location in Jerusalem in the Upper Room, Rabbi Jonathan Bernis teaches us how to observe the rich traditions of the Passover Seder — just as Yeshua (Jesus) did with His disciples over 2,000 years ago, known as the Last Supper.