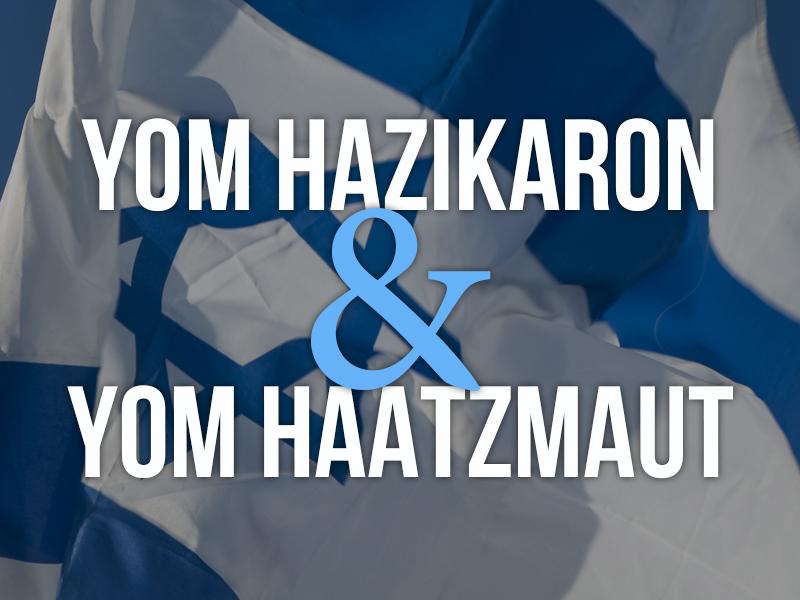 Before Israel rejoices, she mourns. Before she celebrates her independence, she honors those who died protecting it.

Yom HaZikaron (Yohm Hah-Zee-kah-ROHN) is Israel’s Memorial Day. It falls the day before Israelis celebrate their independence on Yom HaAtzmaut (Yohm Hah-AHTZ-mah-oot). The deliberate pairing of these two holidays side-by-side highlights the fact reality that the freedom of Israel today rests squarely on the sacrifices of those who fought to defend her existence and protect her people.

A two-minute blast of an air raid siren marks the onset of Yom HaZikaron at 8:00 p.m. on the 4th of Iyar. An official ceremony at the Western Wall includes the lowering of the Israeli flag to half-mast. Public places of entertainment close, by law, for the 24 hours of the holiday.

At 11:00 a.m. the following morning, another siren sounds, and all Israel observes two 2 minutes of silence. They stand to honor those who died in the War of Independence and serving the country since. It is a somber day of remembrance and respect, even in today’s Israel 70 years after her independence.

On Yom HaZikaron, the nation holds public prayers in military cemeteries, and, throughout the day, radio and television stations air programming honoring the fallen, telling stories of heroes and playing songs in keeping with the mood of the occasion. At least one television station airs a scrolling list of names of those who have died in service to the nation of Israel. Many high schools have memorial areas with photos of fallen graduates and invite the families to prayer services on the Memorial Day.

From somber to celebrating

With the raising of the flag back to full staff just after sunset on the 5th of Iyar, Israel makes a dramatic shift from mourning to rejoicing. Yom HaAtzmaut has begun!

In Israel today, Independence Day opens with an official ceremony at Mount Herzl in Jerusalem at which the president delivers a speech. The evening also includes a military parade and the lighting of 12 torches symbolizing the 12 Tribes of Israel. The evening is filled with outdoor parties, concerts, folk dancing and other festivities and concludes with fireworks displays all across the nation.

The following day (still the 5th of Iyar on the Hebrew calendar), families gather in parks for picnics, barbeques, hiking and other recreation. Museums, nature preserves and other attractions hold free events and activities for the public. Israeli Defense Forces (IDF) bases offer public tours and highlight recent technological achievements.

Another highlight of Yom HaAtzmaut is the International Bible Contest, the Chidon HaTanakh (Hchee- DOHN Hah-Tahn-AKCH). Teen contestants from the world over challenge their detailed knowledge of the Scriptures in a nationally televised competition.

Yom HaAtzmaut celebrations conclude with honoring the year’s winners of the prestigious Israel Prize, the highest honor in Israel today. The awards are given to citizens who have contributed in outstanding ways to Israeli society in the categories of humanities, science, arts and culture as well as through their lifetime achievements.

In 2018, Yom HaAtzmaut begins at sunset on Wednesday, April 18 and concludes at sundown on Thursday, April 19. This year marks the 70th anniversary of Israel’s rebirth as a nation.