The Prophetic Nature of the Fall Feasts 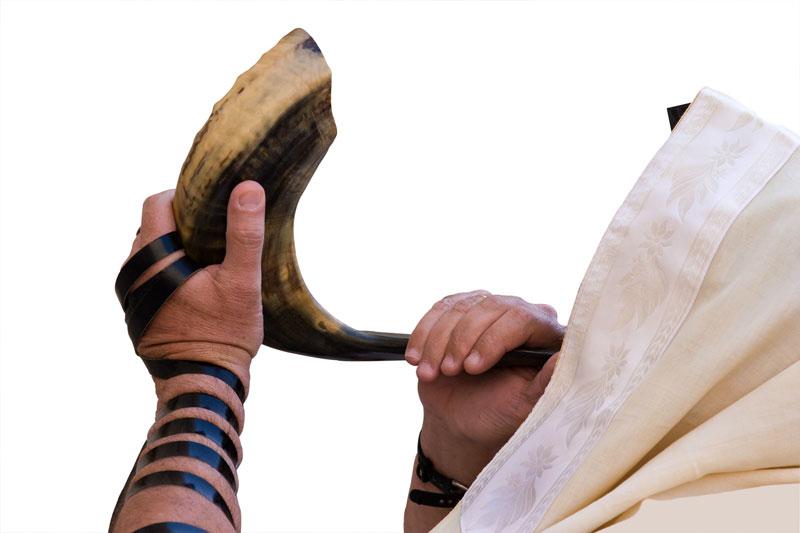 The Fall Feasts are almost upon us! By that I mean Rosh Hashanah, Yom Kippur and Sukkot. Each of these feasts has a universally accepted meaning to Jewish people in general, but to those of us who have received Yeshua (Jesus) as our Lord, and to the believing Gentiles that have been grafted into the House of Israel, there is a deeper, more prophetic meaning. Let’s take a look at each of them in turn.

Rosh Hashanah is the Day of Trumpets. It is widely celebrated in the Jewish world as the civil new year, and is the entranceway into the ‘Days of Awe.’ The blasts of the shofar are our wake-up call to repent before it is too late. Even those of us who have received salvation need to be shaken out of our complacency and pushed to higher levels in Messiah. As believers though, we are desperately awaiting that time when the Lord Himself will return to this Earth. Scripture states in 1Thessalonians 4:16-17 that the “Lord himself will come down from heaven with a rousing cry, with a call from one of the ruling angels, and with God’s shofar; those who died united with the Messiah will be the first to rise; then we who are left still alive will be caught up with them in the clouds to meet the Lord in the air; and thus we will always be with the Lord.” 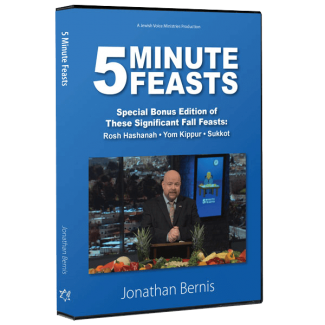 Get the 5 Minute Feast DVD

Discover how easy it is for you to celebrate the Fall Feasts that God prescribed in the Bible.

There are different positions within the Church on the timing of this passage in 1Thessalonians. Some believe in a pre-tribulation Rapture in which all of the believers are whisked away before the seven year Tribulation. Others insist that the Lord only returns once and that when He’s back, He’s back and it’s done. Whatever your stand, it’s safe to say that the blast of the shofar on Rosh Hashanah will signal the end of the world as we know it. And then, “It will take but a moment, the blink of an eye, at the final shofar. For the shofar will sound, and the dead will be raised to live forever, and we too will be changed.” (1Corinthians 15:52) So we approach the Day of Trumpets with Godly fear and repentance.

Yom Kippur is considered to be the holiest day in the Jewish calendar, after Shabbat. This is the day in which we make atonement for our sins before the Lord. This is the day of somber reflection, prayer and fasting. In ancient Israel, after the high priest sacrificed the bull and goat for the sins of the people, a second goat, known as the scapegoat, was taken by the high priest. He would lay both hands on its head and confess over it all the wickedness and rebellion of the Israelites and put them on the goat’s head. He would then send the goat away into the desert to a solitary place. (Leviticus 16:20-22)

As Believers, we know, of course, that our atonement is Yeshua Himself. It is only through His sacrificial death on the executioner’s stake that we can receive forgiveness of sins. He is the scapegoat, sent to die outside the camp for all of our wickedness and rebellion. It was all placed on His head, thus causing Him to die the most horrible death in all of human history. The atonement of Yeshua reaches backwards and forwards so that every person who has ever existed has the opportunity to repent before God and be saved. What an awesome thing! 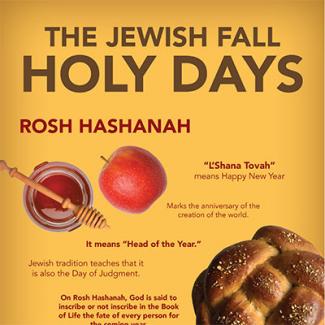 Get the Fall Feasts Infographic

Discover the meaning and wonder of Rosh Hashanah, Yom Kippur, and Sukkot with this specially designed infographic.

Sukkot, or the Feast of Tabernacles, is the most joyous celebration of all. The Lord commanded the Israelites to build booths and live in them for seven days: “All native-born Israelites are to live in booths Sukkot-Graphicso your descendants will know that I had the Israelites live in booths when I brought them out of Egypt. I am the Lord your God.” (Leviticus 23:42-43) We are also commanded to “take choice fruit from the trees, and palm fronds, leafy branches and poplars, and rejoice before the Lord your God for seven days.” (Leviticus 23:40) Sukkot is the ingathering; it’s the time to remember how the Lord provided for us as we wandered in the desert for 40 years.

Prophetically, though, Sukkot points us to the time when God will dwell with us in the holy city, Yerushalayim. “(Jerusalem) This is what the Lord says: ‘I will return to Tsiyon and dwell in Yerushalayim. Then Yerushalayim will be called the City of Truth, and the mountain of the Lord Almighty will be called the Holy Mountain.’” (Zechariah 8:3) Imagine what it will be like when the Lord returns to this earth and sets up His throne and all peoples stream to Him! “The Lord will be king over the whole earth. On that day there will be one Lord, and his name the only name.” (Zechariah 14:9) Now we need to be commanded to be joyful, then there will be no holding back the exaltation!

Our bodies are temporary structures, like the booths at Sukkot. A day is coming when we will be given new bodies, we will realize eternity, and the Lord will be with us always. “For the Lamb at the center of the throne will shepherd [us], will lead [us] to springs of living water; and God will wipe every tear from [our] eyes.” (Revelation 7:17)