A couple of months ago, as millions of Ukrainians were fleeing their homeland, I got on a plane.

Rabbi Jonathan Bernis and I and a few other members of the Jewish Voice team flew to Poland and then walked on foot across the border into Ukraine. We wanted — needed — to see our brothers and sisters there, who have led a Messianic congregation for years and with whom we’ve ministered side by side. We wanted to see them, to pray with them, and to ask them how we could help. It was a long and anxious trip, but I’m grateful we made it.

We didn’t start 2022 planning to walk into Ukraine. Then again, millions of Ukrainians didn’t start the year expecting a violent invasion from a Russian tyrant. We all make plans. That’s not a bad thing. But it’s often when our plans are disrupted — or at least they seem to be — that we’re forced to ask ourselves: do we really believe God is in charge? What could He possibly be doing now?

As I wrestled with these questions earlier this year, God gave me a new answer in a very, very old Jewish celebration.

I’ve been celebrating Purim since I was a kid. Growing up in a network of Messianic congregations in upstate New York, I loved the costumes and the noise and the treats (those fruit-filled triangle cookies are called “Hamantaschen,” by the way). One year when I was about 9 or 10, our Rabbi – an energetic teacher you may have heard of named Jonathan Bernis – offered a prize for the best Purim costume. I can’t remember what goofy get-up I chose, but somehow, I won that prize: a big wooden grogger.

Groggers are a Purim tradition. They’re noisemakers – “grogger” is actually the Yiddish word for “rattle.” The idea is that as we read aloud the Old Testament book of Esther, which is the foundation of Purim, we spin our groggers to drown out the name of Haman each time it is read. Haman is, of course, the enemy who convinced his king to plot genocide against the Jewish people.

As I’ve gotten older, I’ve found that each year, my understanding of this particular Jewish holiday grows deeper. This year in particular, as my team struggled with interrupted ministry plans and great worry for our friends overseas, the Holy Spirit allowed something to click for the very first time.

He drew me to the Old Testament book of Ezra, which takes place a few years after the story told in Esther. Ezra was a Jewish scribe living under exile in Babylon. He was a subject of King Artaxerxes, who ruled the vast Persian Empire from present-day India to Ethiopia. This King Artaxerxes was the son of Xerxes, the king whom Esther persuaded to stop the destruction of the Jewish people just eight years earlier.

At the beginning of the book of Ezra, we discover that the Persian king has agreed to allow the Jewish people to partially rebuild their temple and to begin again offering sacrifices to the Lord on the altar there. God then calls Ezra to gather a group of fellow Jewish exiles for a pilgrimage to Jerusalem. In Ezra Chapter 7, we find a strange letter sent from King Artaxerxes to Ezra regarding this upcoming journey:

“I have now issued a decree that anyone in my kingdom from the people of Israel… who wish to go up to Jerusalem with you, may go,” Artaxerxes writes. “You are to bring the silver and gold that the king and his counselors have freely given to the God of Israel… I, King Artaxerxes, hereby issue a decree to all the treasurers of Trans-Euphrates to diligently provide all that Ezra the kohen, scribe of the Law of the God of heaven, may ask of you…” — Ezra 7:13,15,21 TLV

It’s an unbelievably generous offer. The king has written Ezra a letter that not only guarantees his safe passage from Babylon all the way into Jerusalem, but that mandates everyone along the way give him whatever he asks – bulls, lambs, gold, silver – to add to his store of offerings for the Lord. Later in the letter, King Artaxerxes demands that no one impose any taxes on Ezra or his group; and then he declares that anyone who “does not observe the law of your God and the law of the king” must be punished either by banishment or death (Ezra 7:26 TLV).

How can this be explained? What could motivate such a powerful leader to be so timid before a powerless people living under oppression?

I believe the answer lies in the Book of Esther. As the son of King Xerxes, Artaxerxes would have known the story of the God who saved His people from the genocidal hands of Haman. Surely his father would have warned Him of the power and might of this God of Israel, who had promised to sustain and bless His people over and against all enemies. But you don’t have to take my assumption as the final word. Listen to Artaxerxes himself, explaining his motivation in his letter to Ezra:

“Everything that the God of heaven has required, let it be done with diligence for the House of the God of heaven. For why should there be wrath against the realm of the king and his sons?” (Ezra 7:23 TLV).

Fear. Reverence. King Artaxerxes had seen what God would do for the people of Israel, and he was not about to stand in the way of that God now.

My friends, this “epilogue” to the Book of Esther hit me like a splash of cold water this year. It reminded me of something profound that I want to share with you. God is at work every moment; even when things seem most dark. Even when it seems that the countless enemies of the Jewish people might finally triumph, the truth is that God is a master chess player. We can only see one match at a time. He is playing on a million boards; and He is winning each one.

Our lives here on Earth, which the Bible says are “like a breath” – are like threads in a tapestry that God weaves and never stops weaving. There is no moment that He didn’t ordain. There is no suffering He didn’t mean for good.

Years before Haman gave into his pitiful hatred, God told Abraham He would make his sons like the stars of the sky (Genesis 15:5). He promised David that salvation would come through the Jewish people (2 Samuel 7). These things were never not going to happen. I believe the Enemy hates that. He hates how much God loves His people; and he hates knowing his ultimate humiliation is sure.

The story of Esther isn’t a story of the Enemy charging forward and God merely delaying defeat. My friends, I believe the entire story of Esther, from threat to deliverance, was a divine set-up. I believe the script is flipped: it was the sure survival and flourishing of the Jewish people, even unto salvation in Yeshua (Jesus), that so enraged the Enemy that he lashed out, in fear and envy, through Haman.

I believe this same holy pattern plays out repeatedly through Scripture and even through our lives today. Consider the reinstatement of Israel as the Jewish homeland in 1948. The years before this prophetic victory were some of the darkest in modern history for the Jewish people. The Holocaust claimed millions of lives and was a direct attempt – right in Haman’s footsteps – at total annihilation of God’s Chosen People. Couldn’t it be that God had always planned to return Israel to her homeland in 1948; and that the Enemy’s rage against this reality prompted the murderous hatred that preceded it?

The reason I’m so passionate now about seeing this pattern – of the Enemy’s rage, followed by God’s miraculous victory and provision – is that I believe it can empower us to fulfill a different Scriptural command: to “not grow weary” (Hebrews 12:3).

Jewish Voice has been striving to bring the Gospel to the Jewish people across the world for 55 years now. We’ve celebrated incredible victories, and we’ve faced incredible challenges. How do we continue reaching and ministering to our Jewish friends and neighbors in a war-torn Europe? How can we continue serving the “Lost Tribes of Israel” in remote African villages when our safe passage in and out of these politically unstable nations is never quite sure?

This is how: we bring our anxieties to the Lord in the form of a question: Lord, despite the suffering we see and the challenges we face, what goodness and deliverance are around the corner? What can we look forward to in hope and faith, knowing our victory in You is secure?

Every book in the Bible, including Esther, points to this one beautiful reality: God is saving us. All Israel will be saved by a Jewish Messiah named Yeshua. The world is full of Hamans. We could spend our days wringing our hands over that fact; but that would be a terrible waste. As for me and our team at Jewish Voice, we choose to trust in God instead. We will trust the ultimate chess player by tuning our hearts to hear His victory, even when it sounds faint and far-off. Because there is tremendous joy and blessing in that perspective. I don’t want to miss out on that joy!

As we march forward in our mandate to reach the Jewish people with the Good News of the Messiah, we will continue to make our plans. But we’ll also trust that not only is God in charge — not only is He not threatened or thwarted by military invasions or political unrest — He is also GOOD. And when we need help drowning out the voices of anxiety? Well, we’ve got a grogger for that.

Moving Forward: Celebrating 55 Years of Proclaiming the Gospel to the Jew First 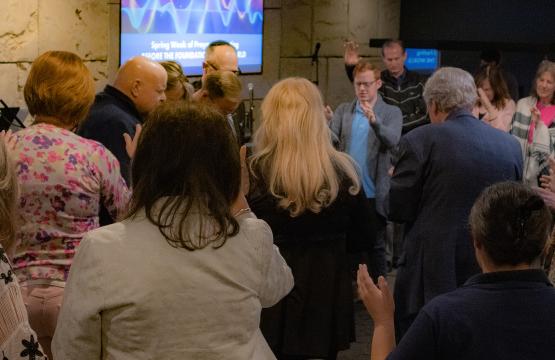 Moving Forward: Celebrating 55 Years of Proclaiming the Gospel to the Jew First