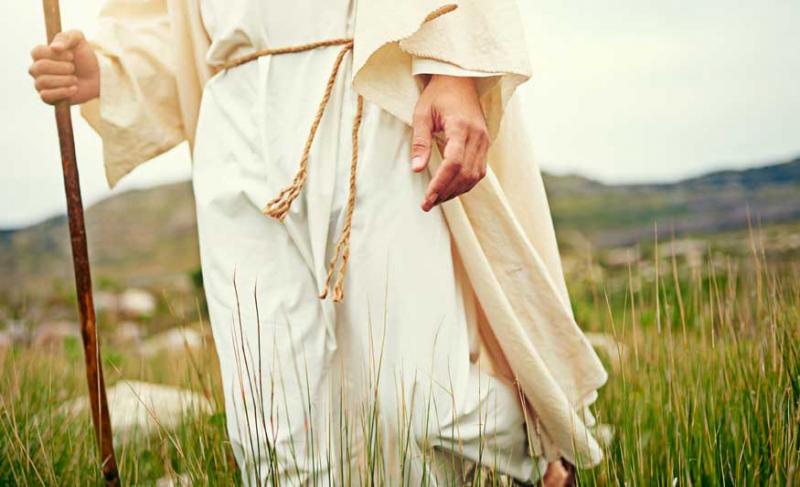 Answer: “Obviously, you don’t believe in the virgin birth, otherwise you wouldn’t be raising this objection. Therefore, you believe that the disciples invented the myth of the virgin birth—a myth totally unique in the history of religion (see above, 5:9) even though you argue that this “myth” completely undercut their claim that Jesus was the son of David. Wouldn’t this be totally self-defeating? As we demonstrated above (see again 5.9), no one would make up an account like this, especially when the people in Jesus’ hometown thought he was the son of Joseph (and therefore a descendant of David) while the crowds hailed Jesus as the son of David when he entered Jerusalem. To the contrary, it is the truth of the virgin birth that explains the unique Messianic qualifications of Yeshua—both the son of David and yet greater than David while his actual, physical descent from David is also taught in the New Testament. As for the Messiah having to come through Solomon, that is not correct according to the Scriptures or even according to some Rabbinic tradition.” (See Answering Jewish Objections to Jesus, vol. 4, pp. 83-97)

“Jesus cannot be the Messiah because he is a descendant of King Jehoiachin. God cursed both this king and his offspring, saying that none of his descendants would ever sit on the throne of David.”

Answer: “There are some Bible teachers who argue that only Jesus is qualified to be the Messiah because of the curse on Jehoiachin. In other words, it is argued that the Messiah should have come through the royal line of Jehoiachin but that king’s descendants were disqualified from sitting on the throne. Therefore, it is only through the virgin birth that the curse of Jehoiachin’s descendants can be bypassed. In reality, however, there is no need to raise this argument, since the curse on Jehoiachin may only have referred to his own sons and, more importantly, the Hebrew Bible gives strong indications that he repented and the curse was reversed. This understanding of the text is actually confirmed by Rabbinic tradition.” (See Answering Jewish Objections to Jesus, vol. 4, pp. 97-102)

“Jesus did work some miracles, but they were not by God’s power. We have traditions that tell us he learned magical arts in Egypt.”

Answer: “Aside from the fact that it is highly unlikely to say the least! that someone could raise the dead and open the eyes of people born blind by demonic or magical power these were the kinds of miracles that Jesus performed, and they demonstrated the power of God, not the power of demons the idea that Jesus learned magical arts in Egypt has as much factual or historical support as the claim that Santa Claus delivers gifts through the chimney on Christmas Eve. In fact, the Talmudic account that claims that a certain “Jesus” practiced magic actually places that “Jesus” in the wrong century! Also, the miracles of Jesus resulted in multitudes of Jews praising and worshiping the God of Israel, to whom Jesus pointed all people. To this day, around the world, genuine miracles take place as followers of Jesus simply pray to the God of Abraham, Isaac, and Jacob in the name of Yeshua the Messiah. This is hardly magic!” (See Answering Jewish Objections to Jesus, vol. 4, pp. 102-106.)

“Jesus didn’t fulfill any of the Messianic prophecies. We know that the New Covenant writers actually reconstructed the life of Jesus so as to harmonize it with certain predictions made by the prophets.”

Answer: “We have demonstrated elsewhere that Jesus, in fact, did fulfill all the Messianic prophecies that had to be fulfilled before the Second Temple was destroyed in the year 70 C.E. We have also shown the historical reliability of the Gospels. But there is a problem with your whole objection. It is self-contradictory! Why would the New Covenant writers intentionally rewrite the events of Yeshua’s life so as to make him fulfill predictions that were not really Messianic? If the prophecies which they quoted were really non-Messianic (or, if they had to be wrenched out of context to be used), then why did they “make” Yeshua’s life conform to them? I should also point out that there is not ounce of verifiable evidence that you can provide to support your claim.” (See Answering Jewish Objections to Jesus, vol. 4, pp. 106-109.)

“When Jesus failed to fulfill the prophecies, his followers invented the myth of his substitutionary death, his resurrection, and finally, his second coming, which, of course, they completely expected in his lifetime.”

Answer: “In order to make this claim, you virtually have to rewrite the entire New Testament, since a central theme of those writings, from their earliest strata on, is that Jesus had to go to the cross and suffer and die and then rise from the dead. This was his sacred mission! And Jesus frequently taught about his departure from this world and his eventual return, also indicating that he would be away for a long time. Not only so, but his substitutionary death also helped explain a number of passages in the Tanakh that spoke of the vicarious suffering of God’s righteous servant. Would you argue that the followers of Jesus also invented those passages?” (See Answering Jewish Objections to Jesus, vol. 4, pp. 109-111.)

“Do you want irrefutable proof that the authors of the New Testament didn’t know what they were talking about? Well, look at Matthew 23:35, where Jesus states that the last martyr spoken of in the Hebrew Scriptures was Zechariah son of Berechiah. Actually, that was the name of the biblical prophet (see Zech. 1:1); the last martyr was Zechariah son of Jehoiada (see 2 Chron. 24:2022). So, either Jesus, your alleged Messiah, didn’t know his Bible, or else Matthew (or the final editor of his book) didn’t know the Tanakh. Either way, this is a glaring error that cannot be ignored.”

Answer: “Actually, there are simple solutions to this apparent discrepancy which are totally reasonable and which completely resolve the problem. I should point out, however, that the force of your objection is exaggerated, since there are similar difficulties in some ancient Rabbinic citations of Scripture, one of which also seems to confuse these two Zechariahs. Do you therefore conclude that the ancient rabbis didn't know what they were talking about? As for the verse in Matthew, there are several possible explanations for apparent discrepancy. It is possible that Zechariah son of Berechiah was also martyred, but it is most likely that the text is referring to Zechariah son of Jehoiada. However, the Targum to Lamentations conflates Zechariah son of Jehoiada with Zechariah the son of Berechiah (perhaps the name of his grandfather), and it is possible that Matthew does this as well. Another possibility is that, as often happens with ancient literature; a small copying error crept into many New Testament manuscripts. There exist a minority of Greek manuscripts of Matthew that contain the name Zechariah son of Jehoiada while some later Hebrew copies of Matthew simply read Zechariah, etc., suggesting that the words son of Berechiah may not have been in the original.” (See Answering Jewish Objections to Jesus, vol. 4, pp. 111-116.)

“The New Testament is self-contradictory (especially the Gospels)!”

Answer: “This subject has been addressed thousands of times in commentaries and books dealing with apparent contradictions in the Bible, and the same fair and honest methods that resolve problems like this in the Hebrew Scriptures also resolve similar problems in the New Covenant Writings.” (See Answering Jewish Objections to Jesus, vol. 4, pp. 116-119)

“Matthew claims that when Jesus died on the cross, “the tombs broke open and the bodies of many holy people who had died were raised to life. They came out of the tombs, and after Jesus’ resurrection they went into the holy city and appeared to many people” (Matt. 27:5253). This is obviously complete nonsense, without any hint of historical support. If such an incredible event ever took place—something like “the night of the living dead” in ancient Jerusalem—someone would have recorded it.”

Answer: “Someone did record it: Matthew! The question is, Do you believe what he wrote? Or, perhaps a better question is, Is this account credible? Could such a thing have happened? The fact is, the death of the Messiah for the sins of the world was one of the most important events in world history. Why should it be surprising that such an event would be attended with all kinds of unusual phenomena? The whole account in Matthew may seem incredible, but it is hardly impossible.” (See Answering Jewish Objections to Jesus, vol. 4, pp. 119-123)

“The teachings of Jesus are impossible, dangerous, and un-Jewish (“Hate your mother and father,” “Let the dead bury their own dead,” “Give to whoever asks you,” etc.). There’s no way he should be followed.”

Answer: “As the Messiah and Son of God, Yeshua had the right to make serious demands of his followers, in keeping with God’s demands on Israel in the Hebrew Scriptures. Still, some of his teachings have been misunderstood on occasion, ironically enough, because of a lack of appreciation for the Jewish background of his words while there are parallel accounts in traditional Jewish literature, until this very day, calling for radical commitment to Torah study, often to the dismay of family and friends. If this is justifiable, how much more justifiable is a wholehearted commitment to the Messiah? Those who know him and follow can testify firsthand that his ways are ways of life and what he demands of us, in the end, is for our good.” (See Answering Jewish Objections to Jesus, vol. 4, pp. 123-147.)

“The New Covenant is anti-Semitic. It is filled with negative references to the Jewish people, and it blames them for the death of Jesus.”

Answer: “The New Testament reflects internal tensions and differences between different groups of religious Jews some of whom followed Jesus the Messiah, and some (or, most) of whom rejected him as Messiah. These writings are no more anti-Semitic than the Hebrew Scriptures where both God and the prophets call the people of Israel stiff-necked and obstinate rebels. It is also important to understand that the Greek word translated “Jews” can also mean Judeans or Jewish leaders, so that, in context, many of John’s negative statements about “the Jews” are limited to specific groups or leaders. You might also be surprised to know that the New Testament has many wonderful things to say about the Jewish people, including God’s present love and care for them and His promise of a very bright future for them. As for Jewish guilt in rejecting Jesus, I’m sorry to say that it is a shameful fact of our history that some of our religious leaders played a key role in turning him over to the Romans to be crucified. We as individual Jews should repudiate that error by embracing Jesus the Messiah. This is all addressed at length in volume 1, 2.8.” (See Answering Jewish Objections to Jesus, vol. 4, pp. 147-150.)