The Jerusalem Post in mid-August reported that the Islamic State (ISIS), “Is much larger than previously thought and still poses a significant threat.” The U.S. Defense Department, U.S. Congress and the United Nations estimate there are up to 30,000 ISIS fighters in Iraq and Syria, and the jihadis now are “eyeing a new caliphate in Afghanistan.”

What, if anything, does the resurgence of ISIS mean to the Jewish people?

The ISIS Threat to Israel

The Times of Israel cited a 2016 article in the ISIS weekly newspaper in which an ISIS leader explained that ending Saudi Arabia’s control over Mecca and Medina was the terror group’s first priority. “For the Islamic State, ‘Jihad in Palestine is equal to jihad elsewhere,’” The Times of Israel stated. “The [ISIS] article calls for jihadists to take the fight to ‘infidels’ nearest to them. Therefore, fighting the Jews should be left to Muslims in Israel/Palestine, while Syrian Muslims should fight Bashar Assad and Egyptian Muslims should fight Abdel-Fattah el-Sissi.”

The article states that ISIS must topple Arab regimes that defend Israel before its fighters cross “the borders of [the] Jew[ish] State and confront its army directly.”

The threat to Israel and the Jewish people comes from two sources: (1) lone wolf attacks from jihadists in Palestine, Israel and anywhere else in the world and (2) from a larger ISIS force that hopes to attack Israel once it destroys secular Arab states. 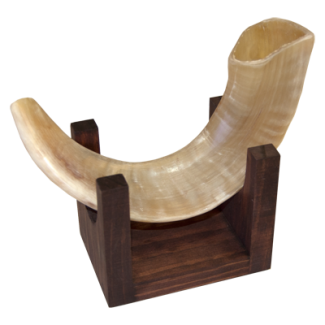 Get the Small Shofar and Stand

This small shofar is made of a ram’s horn and measures 8” to 12”. Colors, textures, and finish vary in these natural animal horns but all are beautiful and have been tested to be functional before shipping. Includes a beautifully crafted wooden stand to display your shofar.

In 2015, Israeli authorities broke up the first known terror plot inside Israel and indicted seven Israeli-Arabs for belonging to an ISIS cell. Several more plots have been thwarted since then.

Still ISIS-inspired “lone wolf” attacks started inside Israel in 2016. An Israeli Arab shot three people in Tel Aviv, and two Palestinians killed four Israelis at Tel Aviv’s Sarona Market. Since then, Israel has revoked citizenship of several Israelis who were trained by ISIS in Iraq and Syria and returned to Israel for jihad.

These sorts of attacks will continue against Israel while ISIS works to defeat the Arab nations around Israel and bring Mecca and Medina under ISIS control.

We’ve heard ISIS was defeated and their caliphate destroyed. While it’s true the “state” part of the Islamic State has declined because of military losses of land it held in Iraq and Syria (once the size of the United Kingdom), the ideology is alive and growing. ISIS has gone underground and continues to recruit jihadists to carry out its goal to control the entire world under strict Islamic rule.

According to military.com, “ISIS may have lost ground, but it has reverted to isolated attacks. It funds its operations through international narcotics trade.”

The Jerusalem Post also has reported that ISIS is building its cyber capacities, not only to distribute propaganda and encourage “lone wolf” attacks in the West, but also to hack institutions and critical infrastructure throughout the world.

The organization uses its income and technology to recruit jihadists, pay them better than competing terror groups, indoctrinate children, and launch attacks on “infidels,” including Israel and the Jewish people.

ISIS is a threat to Jewish people and other citizens worldwide. Please pray with us:

Thick black tar covers Israel's coastline
How is this Passover like the very first?
98.9% is another reason to rejoice at Purim
Join us as we stand in prayer
The Watershed of Passover